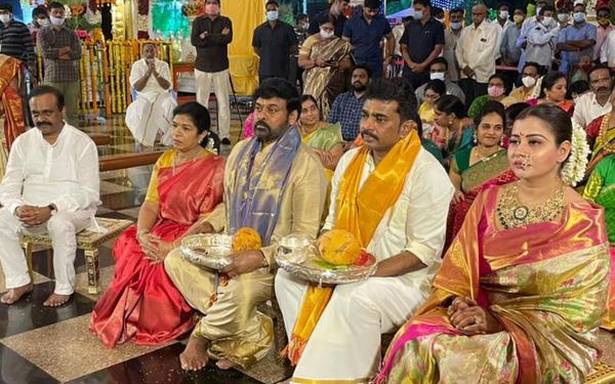 ‘Mega Star’ Chiranjeevi expressed dissatisfaction over media reports that his one-on-one meeting with Chief Minister Y.S. Jagan Mohan Reddy on January 13 was a sign of his inclination to stage a comeback in politics by accepting an offer of Rajya Sabha (RS) seat purportedly made by the YSR Congress Party (YSRCP), and clarified that it was a baseless campaign.

In a brief chat with mediapersons at the airport here, while returning from Sri Venkateswara Swamy temple at Dokiparru in Krishna district where he took part in Goda Devi Kalyanam along with his wife on Friday, Mr. Chiranjeevi said he was staying away from politics and that there was no question of a Rajya Sabha seat being offered to him.

He maintained that he was not aspiring for any such post and his deliberations with the Chief Minister were confined to the issues faced by the Telugu film industry.

“I have distanced myself from politics, but a section of the media gave my interaction with the Chief Minister a political colour through their report. There is no intention to make a re-entry into politics. I want to put a full stop to be put to all this,” he tweeted as his meeting with the Chief Minister triggered intense speculation that it was a prelude to his joining the YSRCP and being sent to the Rajya Sabha.