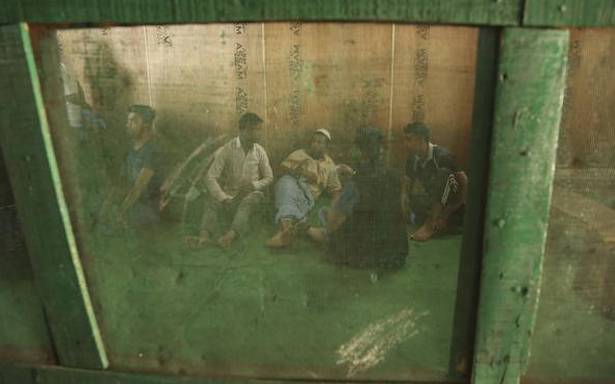 An application was filed in the Supreme Court on Thursday seeking urgent intervention to release and protect over 150 Rohingya refugees reportedly ‘detained’ in Jammu.

The application was filed by a member of the Rohingya community, Mohammad Salimullah, represented by advocates Prashant Bhushan and Cheryl d’Souza.

Mr. Salimullah is already a petitioner in the Supreme Court against the deportment of refugees who had fled from religious persecution and violence in their native Myanmar.

He said that his application was based on reports in The Hindu and other media outlets that Rohingya members had been detained in a sub-jail in Jammu.

“This follows the Union Minister Jitendra Singh’s statements two months ago that the Rohingya (identified as Muslim refugees by the government) would not be able to secure citizenship. These refugees have been illegally detained and jailed in the Jammu sub-jail, which has been converted into a holding centre with the IGP (Jammu) Mukesh Singh stating that they face deportation back to Myanmar following verification by their embassy,” the application said.

It urged the court to “release the detained Rohingya refugees immediately and direct the Union Territory government and the Ministry of Home Affairs to expeditiously grant refugee identification cards through the FRRO for the Rohingyas in the informal camps”.

It further requested the court to direct the Centre to refrain from implementing any orders on deporting the Rohingya refugees detained in the sub-jail in Jammu.

The application said the United Nations High Commissioner for Refugees should be asked to “intervene and determine the protection needs of the Rohingya refugees not just in the Jammu but also in camps across the country and complete the process of granting them refugee cards”.

“News reports started coming in around March 7, 2021 regarding the nearly 150-170 Rohingya refugees in Jammu being detained. Disturbing reports from the Rohingya families have come in that subsequent to a biometric verification of Rohingya refugees undertaken by the Jammu and Kashmir administration, some people never returned to the camps from the verification but were detained and jailed by the police,” the application said.

It quotes from a report in The Hindu detailing how “panic has gripped this already marginalised refugee community in Jammu after the verification drive and disappearance of family members”.

The application said official documents from the office of Deputy Commissioner of Jammu show there were 6,523 Rohingya in Jammu.

In India, no legislation had been passed yet that specifically referred to refugees. Hence, Rohingya refugees were often clubbed with the class of illegal immigrants deported by the government under the Foreigners Act 1946 and the Foreigners Order 1948. This was coupled with discrimination against the Rohingya by the government, they being largely Muslim refugees. Legally, however, a refugee was a special category of immigrant and could not be clubbed with an illegal immigrant. India was bound to adhere to the principle of non-refoulement through customary international law, the application contended.

The principle of non-refoulement – or not sending refugees to a place where they face danger – is a norm of customary international law.