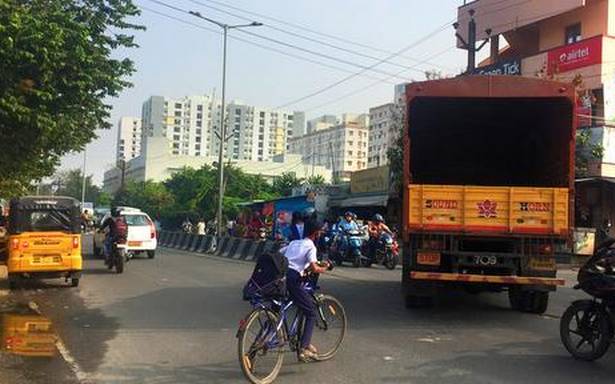 Thanks to the continual vehicular flow through the narrow intersection, crossing the road is no easy task. After having waited impatiently for the fast-moving traffic to ease, Akash decides to weave his way through it.

A speed breaker and a traffic police personnel at the intersection do not prove to be of much assistance to road users like Akash as they try to cross the stretch, especially during rush hour. Walkers and motorists want a digital traffic signal and the existing bus stop on the stretch to be relocated.

“Buses halt at the bus stop near the intersection making commuters and other pedestrians rush from one end of the stretch to the other. Sometimes, even motorcyclists occupy much of the road space near the busy bus stop. A traffic signal would help regulate the traffic flow at least during rush hour,” says K. Velappan, a motorist from Thiruverukadu.

As the five-km-long stretch constitutes a quick route for goods-laden lorries and other container trucks from industrial units in Irungattukottai, Sriperumbudur, Oragadam on the Chennai – Bangalore Highway (NH-04) to Kolkata Highway (NH-05) via the Chennai – Tiruvallur High (CTH) Road, the road witnesses traffic all through the day. A great number of apartment complexes are also coming up.

The intersection at Thiruverukadu has narrowed due to encroachments, and therefore, the width of carriageway has reduced by 40 feet. Only one MTC bus can travel at a time on both sides of the stretch. At present, the widened portion of the stretch is around 60 feet with tiled footpath and LED street lights and median. Further, the carriageway around the intersection does not have a footpath, bright street lights, warning signboards and reflectors. With most of the schools and other public utilities located on one side of the stretch, residents from the opposite side of the stretch have to cross the intersection to avail these public utilities including banks, a PHC and a post office.

“Steps will be taken to install a new traffic signal at the intersection soon,” says a police personnel.