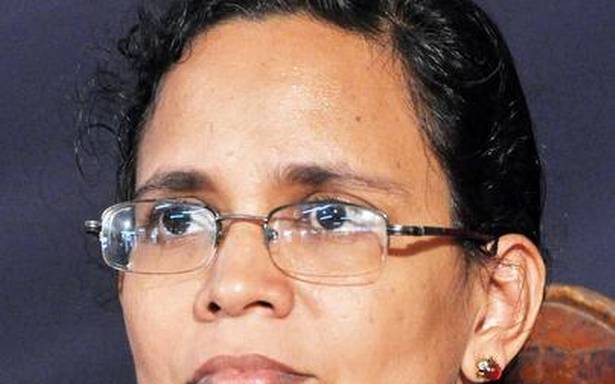 Based on a complaint filed by RMPI State secretary N. Venu, the Kozhikode rural police have registered a case under 153 and 507 of the Indian Penal Code.

Less than a month after former Home Minister and Congress leader Thiruvanchoor Radhakrishnan received an anonymous letter threatening to eliminate his entire family, Revolutionary Marxist Party of India (RMPI) legislator K.K. Rema received a similar letter at her office in Vadakara here threatening to finish off her son in the way her husband and CPI (M) dissident leader T.P. Chandrasekharan had been killed in May 2012.

Based on a complaint filed by RMPI State secretary N. Venu, the Kozhikode rural police have registered a case under 153 ( wantonly giving provocation with intent to cause riot ) and 507 (criminal intimidation by anonymous communication) of the Indian Penal Code. A team was constituted to carry out the probe, the police said.

Ms. Rema said that the letter received via post at her office on the Park Road at Vadakara on Monday threatened to kill Mr. Venu and her son if she engaged in criticizing the CPI (M) during discussions in the media. If Chandrasekharan had received 51 wounds, they would be killed with 100 cuts, the letter said,

The letter addressed to Mr. Venu said that the face of her son would scatter like coconut flower buds on the road. The anonymous letter was signed by ‘Red Army Kannur ‘ and ‘PJ Boys’.

Ms. Rema said that neither she nor her party would be cowed into submission by these threats. She would continue with her political activities as well as the anti- democratic tendencies of the CPI (M), she said.

Ms. Rema created history by winning from Vadakara constituency as she became the first RMPI leader to become MLA with the backing of the Congress- led United Democratic Front in the Assembly polls held in April.