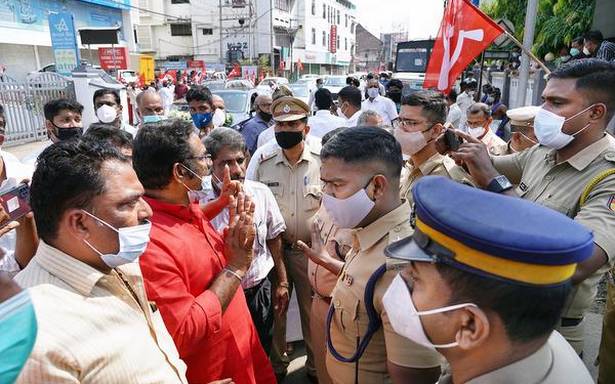 A tense situation prevailed on the premises of the Knanaya Catholic Archdiocese in Kottayam on Sunday when a section of its laity clashed with the official group over a move by the former to install the statue of the Thomas of Cana (Knayi Thoma) here in the morning.

The episode began to unfold around 10.30 a.m. when a procession taken out by the rebels along with a statue of the Thomas of Cana reached the church headquarters here. They faced stiff opposition from the official group backed by the Archeparchy leadership, drawing an intervention by the police.

Following this, a team lead by the Kottayam West Circle Inspector of Police held discussions with the protesters. As the rebels stood their ground, they were cleared off the spot by 1.30 p.m. and booked for unlawful assembly.

An official statement by the Archeparchy of Kottayam later said a group of people had attempted to instal the statue without permission, defying an earlier decision by the church to erect a statue of Knai Thoma along that of Uraha Mar Ouseph (Bishop Joseph of Uraha) at the church headquarters here.

“Though the Knanaya Catholic Congress reached out to them with an assurance to install the statue at some other locations, they refused to see reason and carried on.

In this backdrop, the official committees and feeder organisations of the church raised an opposition. Moreover, there was no way it could have been accepted or welcomed as the move may create an unnecessary precedence,” read the statement, issued by Fr.George Karukapparambil, official spokesperson of the church.

It further noted that the protest staged in front of the Archdiocese office had nothing to do with the love or respect towards the Knanaya community.

“The statements made by the protesters during an argument with the police sought to incite disharmony and hatred towards the community and its leaders including the Metropolitan of the Archeparchy,” it added.

The protesters, on the other hand, accused the church leadership of being subservient to the Syro-Malabar church and attempting to manipulate history of the Knanaya church to suit their agenda.

The installation of statue, which had been brought here in a procession from Wayanad, was intended to highlight the rights of the laity in the church administration.