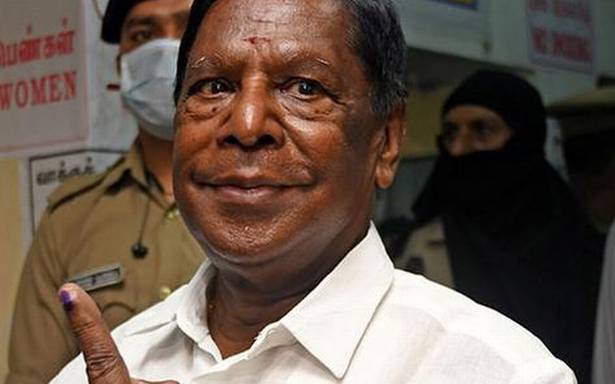 Puducherry recorded a voter turnout of 81.69%, the highest in the southern region where elections were held on Tuesday. This is according to the revised data released by the Election Commission of India on Wednesday.

The highest turnout of 90.95% was recorded in Yanam, while the lowest of 72.68% was registered in Raj Bhavan, where an interesting match-up had the AINRC’s K. Lakshminarayanan up against former Minister S.P. Sivakumar of the DMK. Both are seeking a fifth win from the constituency.

Apart from Yanam, Karaikal recorded a turnout of 80.07% and Mahe 73.54%. In the 23 constituencies falling under the Puducherry region, voters clocked 81.99% turnout.

Polling was relatively low in the two constituencies where former Chief Ministers V. Narayanasamy of the Congress (who is not contesting) and N. Rangasamy of the AINRC cast their votes. Throughout the campaign, the two leaders had more or less been the faces of the rival alliances of the Congress-led front (DMK-Left-VCK) and the NDA (AINRC-BJP-AIADMK, with support from the PMK). Mr. Narayanasamy, along with his daughter, voted at the Government Girls French High School, falling under the Raj Bhavan constituency, while N. Rangasamy cast his vote at the Government Middle School, falling in his base constituency of Thattanchavady, which recorded 75.09% turnout. Mr. Rangasamy is also contesting from Yanam.

Confident of a win

Speaking to reporters after casting his vote, Mr. Narayanasamy said he was confident of the Congress-led alliance coming to power as the people of the Union Territory would not give space to communal parties. Despite the BJP’s use of money power, the saffron party would not be able to come to power, he said.

Mr. Rangasamy, too, exuded confidence of an NDA win. The enthusiastic voting across several constituencies was a sign of a desire for change, and the NDA would romp to power, he told reporters.

Some of the highest polling was reported in constituencies like Mannadipet (87.78%), where former Minister A. Namassivayam of the BJP is pitted against the DMK’s A.K. Kumar; Bahour (87.9%), featuring a tough fight between the DMK’s Senthil Kumar and the AINRC’s N. Dhanavelou; and Mangalam (86.28%), where the AINRC’s C. Djeacoumar is taking on the DMK’s Sun. Kumaravel.

Though the turnout may be a few percentage points lower than in the elections of 2016 and 2011, it is still remarkable, given the second surge of the COVID-19 pandemic and the near-heat wave conditions, election officials said. In empirical terms, the voter participation figures are higher as they exclude the postal ballots, a system of voting that the Elections Department adopted in a much bigger way this year. “Any 80-plus percent turnout is certainly not a let-down, given the pandemic situation,” Chief Electoral Officer Shurbir Singh told The Hindu.

The turnout reflected the “enthusiastic and fearless” participation of stakeholders, especially the voters and even more so, Persons with Disability and senior citizens, in the election process in compliance with COVID-19 safety norms, he said.