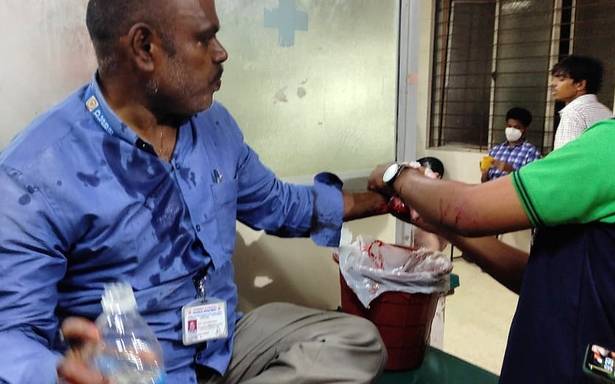 A village accountant at Yettinabudihal and the in-charge revenue inspector of Rupanagudi hobli in Ballari district was assaulted by a group of people late on December 1 for an attempt to seize tractors that were reportedly transporting illegally mined sand.

As per the statement given by the official, K. Venkataswamy, to the police at Vijayanagar Institute of Medical Sciences (VIMS), the officer and his family members were attacked with lethal weapons by a group of around 25 persons led by Makbul, a sand miner. He, his wife and their son were injured in the attack.

The officer told the police that he had, acting on a tip-off, gone to Tolamamidi village on November 30 night, along with Kuntanal village accountant Manjunath and Tolamamidi village accountant J. Ganesh, to seize vehicles that were transporting sand mined illegally. But the sand miners managed to escape with one of the two vehicles after attacking Ganesh. A case was registered in Ballari Rural Police Station against seven persons on December 1.

Makbul had allegedly threatened Venkataswamy over the phone of serious consequences for seizing his sand-laden vehicle and interfering in his sand mining business. Later on December 1 night, Makbul allegedly led the attack on the official and his family.

Based on the victim’s statement, the Brucepet police registered a First Information Report under sections 307 (attempt to murder), 324 (voluntarily causing hurt by dangerous weapons or means), 354 (assault or criminal force on woman with intent to outrage her modesty), 506 (criminal intimidation), 143 (unlawful assembly) and 148 (rioting, armed with a deadly weapon) of the Indian Penal Code.

Staff in the Revenue Department boycotted work on December 2 and staged a demonstration outside the office of the Deputy Commissioner demanding stringent action against the attackers and protection for officials. Many organisations joined the protest to express their solidarity with the assaulted officer and his family.

Ballari Superintendent of Police Saidulu Adavath told The Hindu that both the accused and the victims live in the same colony.

“We have already arrested a couple of accused. Since the victims and accused are neighbours, and have known each other for many years, we cannot rule out personal reasons for the attack,” he said.

“As per doctors’ reports, the injured official and his family are recovering. Senior officers of the police and Revenue Departments called on the victims in the hospital. Revenue Department staff have boycotted their work today and staged a protest outside the Deputy Commissioner’s office seeking protection,” said Rihan Pasha, tahsildar of Ballari taluk.