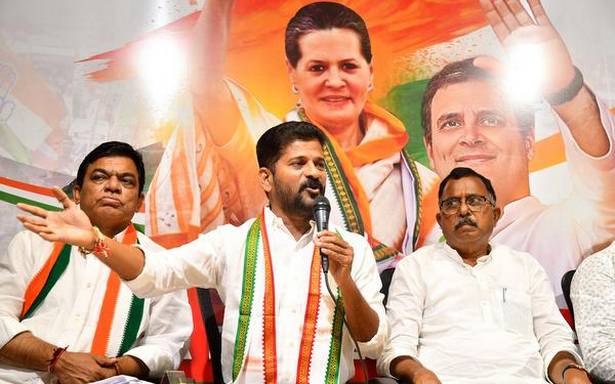 Telangana Pradesh Congress Committee (TPCC) president A. Revanth Reddy has wondered why Chief Minister K. Chandrasekhar Rao was hesitant to order an inquiry into Minister for Labour Ch. Malla Reddy’s ‘illegal assets’ while claiming his government would not spare any corruption.

Releasing the documents of a ‘gift deed’ to Mr. Malla Reddy from his relative and TRS leader Srinivas Reddy, the Congress leader said the same land was used for establishing Malla Reddy University. But there are no records of from where Mr. Srinivas Reddy got that land, he claimed.

He said total availability of land in survey 650 of Gundla Pochampally was just 22 acres and 8 guntas but it surprisingly has increased to 33 acres and 26 guntas in Dharani portal. Of this 16 acres are registered on Srinivas Reddy’s name who has gifted it to Malla Reddy University. Similarly, 5 acres of land in Survey No 488 in Jawahar Nagar Municipality has been named as Government land by the Registration department disallowing transactions but CMR Medical College is established in this land. How did this happen, he asked.

When senior leaders Rajaiah and Eatala Rajender were removed from the Cabinet citing corruption why is Mr. Malla Reddy being spared, he asked. He reminded that an audio of Mr. Malla Reddy threatening a realtor and demanding money for a 50-acre layout was in public domain but the government is silent.

Mr. Reddy claimed the government was unable to respond to his expose of corrupt deals and encouraging the ministers and TRS leaders to abuse him. “Why is the government so frustrated and trying to deviate from the issue,” he asked and said the Opposition had every right to question the unfulfilled promises of the government.

On the resignation challenge of Mr. Malla Reddy, he said he had won as a MP against Mr. Malla Reddy’s son-in-law and in his constituency, and it was laughable that the defeated person is challenging him again. “If the government is confident let the Chief Minister call for fresh polls and Congress is ready for it. If the CM was not confident on general elections let him resign in Gajwel at least. Let the contest be between the TRS president and the Congress president.”

The Congress president also claimed that the drugs case in the State has come into prominence again due to the case filed by him in the High Court. “The State government is not cooperating with the central agencies in the drug scandal as a prominent person in the government is involved in it,” Mr. Reddy alleged.