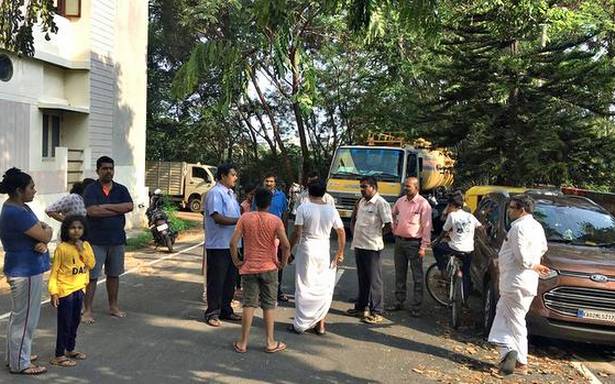 The residents of BEML, 5th Stage, Rajarajeshwarinagar, seized a sewage tanker belonging to the Bengaluru Water Supply and Sewerage Board allegedly dumping untreated sewage into a farm in their locality. They surrounded the vehicle, forced the driver out and took away the keys.

Veena Rajappa, a resident, told The Hindu that they caught the driver red-handed dumping the untreated sewage into the farm. After the residents seized the vehicle, the driver apologised. “We don’t know where the sewage was from and why it was being dumped in our locality. This poses a serious environmental hazard. A couple of residents claimed that they have seen such sewage tankers coming into the locality earlier as well,” she said.

She also said the residents have for long been demanding the BWSSB complete the sewerage line. “The residents took the initiative and spoke to the farm owner, who agreed to have a pipeline run through the farm, so that the sewage could flow into the main line to reach the waste water treatment plant,” she said.

Another resident of the area, on condition of anonymity, said the BWSSB has two treatment plants in the Rajarajeshwarinagar area. “There is no logic as to why the untreated sewage was being dumped in a residential locality,” he said.

However, senior BWSSB officials claimed that the sewage tanker was only being washed there, while stating categorically that untreated sewage was not let into the farm.

Meanwhile, the Rajarajeshwarinagar police came to the spot, after being informed. The police said they will not be able to initiate any action until a complaint is lodged by either the residents or the BWSSB.

Ms. Rajappa said the residents were waiting for the manager of the farm to return to the city.