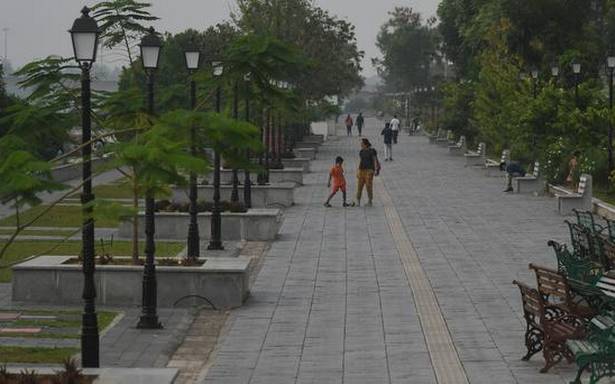 Gym for visitors, play area for children, and LED lights among new facilities

The 2.20-km-long Marine Drive walkway, which was renovated by Cochin Smart Mission Limited (CSML), will be formally opened to visitors on Monday by Minister for Industries P. Rajeeve.

The ₹7.85-crore walkway was almost fully renovated, including by replacing tiles laid by the Greater Cochin Development Authority (GCDA). This was because the tiles laid about eight years ago on the walkway near the High Court had turned uneven at many places.

A gym for visitors, play area for children, and LED lights are among the new additions on the renovated walkway, a popular destination for Kochiites and visitors to the city. The walkway will by April be remotely monitored by the police using CCTV network. This is being readied as part of the Intelligent City Surveillance System (ICSS).

The District Tourism Promotion Council (DTPC) had demanded extension of the walkway up to the boat jetty, even as members of the public were keen to have it extended up to Subhash Bose Park.

CSML too had requested the Kochi Corporation to provide a link with the waterfront walkway of Subhash Bose Park and beyond up to Rajendra Maidan, so that visitors to the Marine Drive can walk all the way up to DH Ground on the southern side and up to Mangalavanam on the northern side. This is part of the initiative to link green corridors located in the city’s western end, it is learnt.

Faced with complaints from regular walkers about the nauseating odour from the nearby Market Canal and the backwaters, the GCDA had submitted a proposal to the government to expand the capacity of the existing sewage treatment plant (STP) which processes sewage from apartments on the waterfront. The Market Canal will be rejuvenated under the canal rejuvenation project in the Greater Kochi area.

A tank was readied on the northern side of the walkway to collect treated water from the STP. This will be used to water plants planted afresh on the walkway, it is learnt.