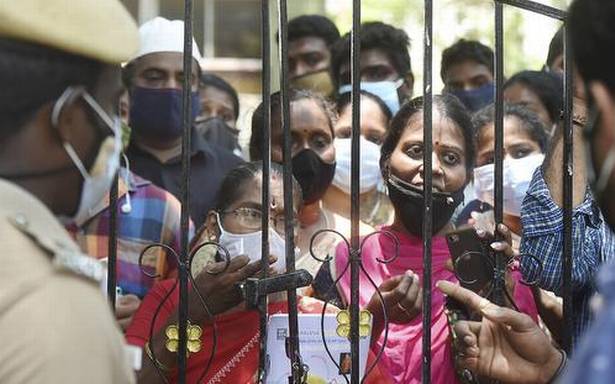 Commitment to States till April 30 not met so far

The government on Friday announced an ‘enhanced commitment to States in the ten-day period till April 30’ allocation of the drug Remdesivir to States battling the second wave of COVID-19 infections, though it has failed to meet its existing , due to ‘issues’ with the placement of orders and transporting the drug across the country.

“After in-depth review of enhanced availability of Remdesivir due to ramped up production, it’s allocation plan to all States has been revised. It’s increased supply will help in fighting pandemic with deeper resolve,” Union Chemicals and Fertilisers Minister DV Sadanand Gowda said in a tweet.

Between April 21 and April 30, the Centre had promised to supply 16 lakh vials to State governments from the seven authorised Remdesivir producers, as per a plan jointly firmed up by the Ministry of Health and Family Welfare and the Department of Pharmaceuticals in the Chemicals and Fertiliser Ministry.

When The Hindu asked if this meant that allocations were being reduced, the Ministry said the initial allocation for States during the ten-day period was 11 lakh doses which was revised to 16 lakh and has now been further enhanced to 18 lakh, albeit over two more days.

“It’s not a per day calculation. The entire allocation from April 21 to May to 2 has been revised to 18 lakh and the validity also increased for 2 more days,” said an official in the Chemicals and Fertilisers Minister’s office, adding that the demand and supply is for a specified period and the supply quota has been increased.

Later, however, the official explained that the revised allocation constituted an enhancement in supplies to States as the 16 lakh vials’ supply commitment had not yet been met.

“Due to some reasons like order placing, transportation, etc., 16 lakh vials could not be distributed to the States by the seven companies. However, by May 2, all 18 lakh vials will be distributed,” the official assured.

For some States, this will mean a slight reduction in the average daily allocation.

However, West Bengal, which was initially allotted 32,000 vials over 10 days, shall now be sent 38,400 vials over 12 days, leaving the average per day availability unchanged.

Meanwhile, the first import consignment of 75,000 Remdesivir vials was expected to arrive on Friday, as per a government statement. Public sector firm HLL Lifecare has ordered 4.5 lakh vials of Remdesivir from U.S.-based Gilead Sciences and Egyptian firm Eva Pharma.