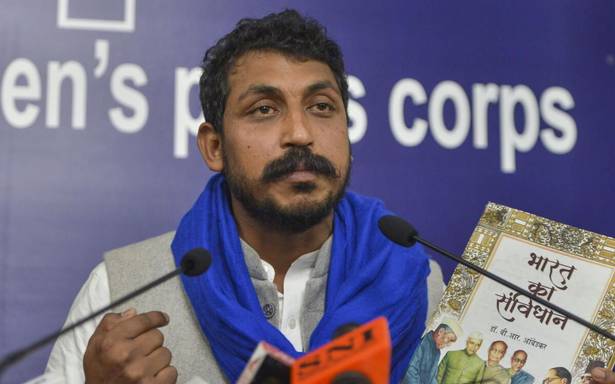 The two new fronts in U.P. may split votes and provide some relief for the BJP, which has witnessed a stream of exits

The recent resignations of several prominent Other Backward Classes (OBC) leaders from the Yogi Adityanath Cabinet and the Bharatiya Janata Party (BJP) have not only dealt a severe blow to ‘Hindutva politics’ in Uttar Pradesh but have also understood to have galvanised the Samajwadi Party (SP)-led Opposition alliance. The excitement in the Opposition is not without reason, as the BJP in recent times has never witnessed such large-scale resignations, that too in a State where it has been in power with an overwhelming majority. All those who resigned described ‘Hindutva politics’ as being against the interests of the Dalits and backward classes. The BJP was put in a defensive position. But the formation of two ‘Bahujan fronts’ seems to have provided respite to the party. The first front, called Bhagidari Parivartan Morcha, was formed by All India Majlis-e-Ittehadul Muslimeen (AIMIM) leader Asaduddin Owaisi, Jan Adhikar Party president Babu Singh Kushwaha, and Bharat Mukti Morcha leader Vaman Meshram. Mr. Kushwaha was expelled from the Bahujan Samaj Party (BSP) in 2011 and was also an accused in the National Rural Health Mission scam. The second front, Samajik Parivartan Morcha, was formed by Bhim Army chief Chandrasekhar Azad, MPs Rajkumar Saini and Baburam Pal and others and comprises 35 groups.

Earlier, after his negotiations with Akhilesh Yadav failed, Mr. Azad accused the SP president of insulting him and Dalits by not giving them a respectful number of seats. He then announced that he would contest from Gorakhpur against the Chief Minister. This came as a surprise to the SP as it was already planning to field one of its local leaders against the Chief Minister in Gorakhpur and wanted the support of most of the Opposition parties. It turns out that Mr. Azad did not consult any Opposition party regarding his candidature from Gorakhpur and, meanwhile, also formed a new front.

The two new fronts cannot be ignored even if there is no established party involved in them, except the AIMIM. The leaders involved in these fronts have their own caste base and will therefore make a discernible impact. Before discussing their influence, let us first understand a few points about them. First, it is not a mere coincidence that these fronts were announced only after the resignations of OBC leaders. Second, the leaders of these fronts have justified their actions by referring to the widespread ‘nepotism’ prevailing in traditional Opposition parties (SP, BSP and Rashtriya Lok Dal) that forced them to look for a ‘new path’. Third, the mass base of the leaders of these fronts has never been tested. These parties have not contested all the seats in U.P. earlier. Unlike leaders like Swami Prasad Maurya, who resigned from the BJP due to pressure from his social base, the leaders of these two fronts cannot even claim that their supporters forced them into the decision of forming a separate front. The truth is that most of their supporters wanted them to fight the election by joining larger anti-BJP fronts. When leaders such as Mr. Azad and Mr. Kushwaha tried and failed, they distanced themselves from the larger anti-BJP Opposition alliances with the excuse that they were not given enough tickets.

Mr. Azad contested the Bihar Assembly election in 2020 but this is his debut in U.P. In a way, Mr. Azad is like Mr. Owaisi, who goes anywhere to contest an election irrespective of whether he has any organisation or political base. In Bihar, Mr. Azad joined hands with Pappu Yadav’s party. They earned the ‘vote katwa’ (splitting votes) tag. They contested more than 150 seats together but did not achieve anything. Will Mr. Azad’s new front in U.P. just be called ‘vote katwa’ or will it achieve some political success?

As far as the Owaisi-Kushwaha-Meshram front is concerned, there is speculation already about the political equations of these leaders. Mr. Kushwaha was Minister twice in the Mayawati government, and even went to jail, allegedly for corruption. Cases related to some of these alleged scams are still pending in courts. A few years ago, he left the BSP and joined the BJP. But there was so much dissent about his induction that he had to quit the party. He then wrote to the then BJP president Nitin Gadkari and appealed to him to keep his membership on hold for a while. This shows that he has no ideological disagreement with the BJP. Similarly, Mr. Saini, who has joined hands with Mr. Azad, was a BJP MP from Kurukshetra for many years. Therefore, it is not without solid basis that these two fronts are being considered as a ‘political relief’ for the BJP and a ‘headache’ for the SP-led alliance. Whether the voters of U.P. reject these fronts or provide them with some consolation prize remains to be seen.

Urmilesh is a Delhi-based independent journalist and writer, and a former Executive Editor of Rajya Sabha TV. The article was translated from Hindi by Awanish Kumar, British Academy Newton International Fellow, University of Edinburgh