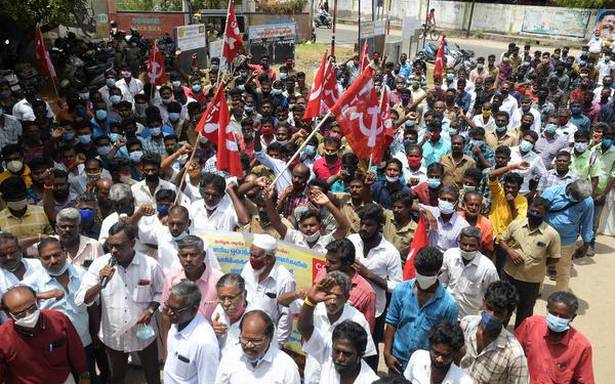 Members of the Central Organisation of Tamil Nadu Electricity Employees (COTE), affiliated to Centre of Indian Trade Unions (CITU), Madurai, staged a protest in front of the TNEB office at K. Pudur, demanding regularisation of services of contract employees.

The body felt that though the contract workers in TNEB were the manpower that stepped up whenever an emergency or breakdown happened, they were never given the recognition they deserved.

Many of them have remained as contract workers for 10 to 15 years, said a State executive member of the organisation, K Jeevanandham.

“We want permanent employment for them. The DMK had taken up this issue in their election manifesto. We hope to get the government’s attention with this protest,” he said.

Mr. Jeevanandham said these employees were kept off the record and their families ended up getting no benefits, if they died in harness. During emergencies like Cyclones Vardah, Gaja and Ockhi, these contract workers were taken to different parts of the State for taking up restoration work and were paid double or triple wages. Hence, they needed more official recognition in employment, he said.

“In 2018, the TNEB promised to give a daily wage of ₹ 380 for these workers. We want it on record and later regularisation of service,” he added. Apart from wiremen, helpers and other workers from TNEB, these contract workers play a major role in pole works undertaken in extension areas.