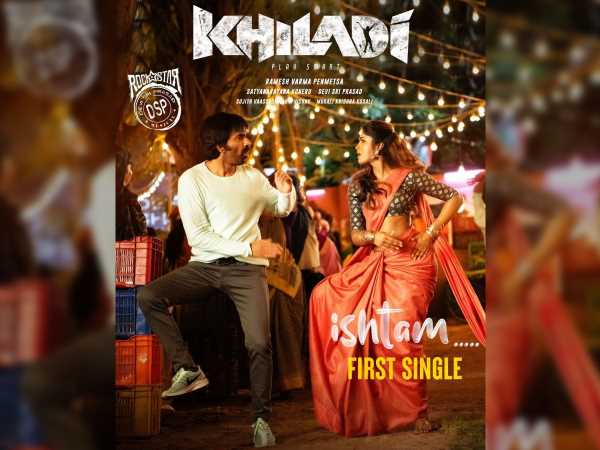 Mass Maharaja Ravi Teja is currently working for his upcoming action drama Khiladi which is directed by Ramesh  Varma. According to the latest buzz, Ravi Teja is playing the dual role in this actioner. Today on the occasion of Vinayaka Chaturthi, the makers of Khiladi released the first single Ishtam, which is a melody number. Composed by star music director Devi Sri Prasad, Ishtam is a catchy melodious number, which is crooned by Hari Priya and the lyrics are penned by Shree Mani.

The song features  Dimple Hayathi  in half sari, and she expresses her likes and this song also discloses her adoration for Ravi Teja.  Dimple and Ravi Teja look good together on screen. The song Ishtam has a bit of a folkish feel and it is choreographed by Yash master.

According to  Ramesh Varma, Khiladi is an unique action  thriller and he is confident that Ravi Teja unique characterization in the film will thrill the movie lovers.  The director added that in personal life, everyone gives importance to the money but in Khiladi, the character of Mass Maharaja will make the viewers introspect if it is human emotions or money that are important in life.  The movie is bankrolled by Pen Movies and A Studios LLP.