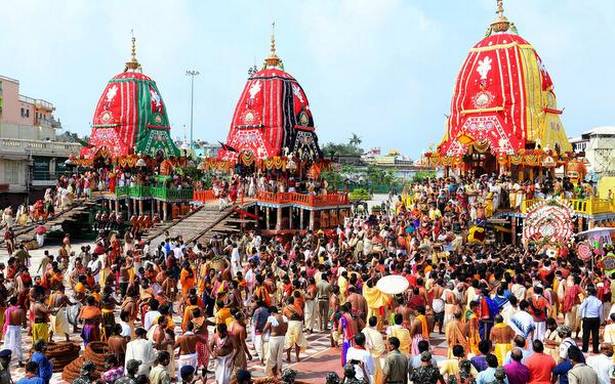 Only Sevayats will be allowed to participate in the rituals, says government

Apprehending that large congregations could trigger spread of infection further, the Odisha government on Thursday said the Rath Yatra (car festival) will be organised only in Puri without devotees.

The annual Rath Yatra, in which thousands of devotees pull chariots of Lord Jagannath, Lord Balabhadra and Devi Subhadra, is scheduled to be held on July 12.

The yatras will not be held at any other place. However, rituals regarding the Rath Yatra will be held in the temple premises.

“The Rath Yatra will be conducted this year in Badadanda, the grand road in front of Shree Jagannath Temple and nowhere else in the State in the same manner as was done last year. However, rituals relating to the Rath Yatra may be performed in temples within premises. No chariots will be pulled in places or temples in Odisha except in Puri,” said the governmen.

“Pulling of the chariots may be performed by Sevayats, police personnel or any other officials as permitted by Shree Jagannath Temple Administration. All such persons must have been vaccinated with two doses or have tested negative in RT-PCR tests done within 48 hours prior to festival,” it said.

There should be sufficient interval between pulling of two chariots while each chariot should be pulled by not more than 500 persons. Prior to 2020, the yatra used to witness a sea of devotees (approximately 8 lakhs in a day) in Puri.

Trains, buses and private vehicles would not be allowed to enter Puri town during the Rath Yatra. “Any person violating these restrictive measures will be liable to be proceeded against as per the provisions of Section 51 to 60 of the Disaster Management Act, 2005, and COVID-19 Regulations 2020, besides legal action under Sec. 188 of the IPC, and other legal provisions as applicable,” said the government.