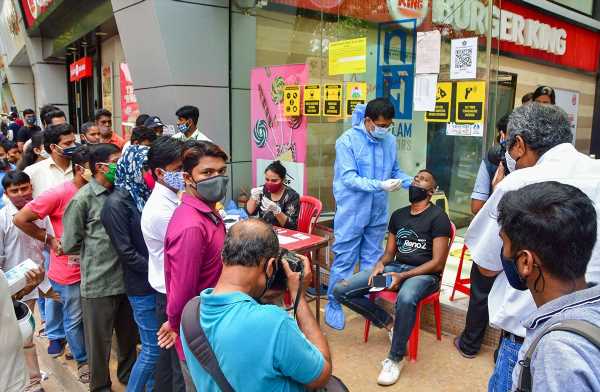 The rate of increase in coronavirus cases in Maharashtra between February 14 to March 23 was three times that recorded in the previous four months, data shows.

After a steady decline since October, the new cases surged noticeably since February 14.

On March 20, Maharashtra reported over 30,000 new cases, the highest since the pandemic began.

In preceding months, it had taken 119 days for the addition of over 4.68 lakh cases.

Maharashtra had gram panchayat elections in some 12,000 villages in January, followed by big political gatherings.

Some health experts blamed the later surge in cases on these events.

“The new strain is more infectious. We have to find out more about the strain and how it responds to the ongoing vaccination drive,” he added.

The average daily fatality count, however, is lower since February 14 compared to the earlier period.

Addressing a press conference in Delhi, Union Health Secretary Rajesh Bhushan said on Wednesday the situation in Maharashtra and Punjab was of ‘grave concern’.

‘Top five districts’ in Maharashtra where high number of cases are being reported are Pune, Nagpur, Mumbai, Thane and Nashik, he said.

Maharashtra reported as many as 31,855 new coronavirus cases on Wednesday, its highest ever single-day spike since the outbreak of the pandemic last year, a health official said.

Before this, the state’s highest daily spike of 30,535 cases was recorded on March 21.

Mumbai city reported its highest single-day tally of 5,190 cases, which pushed its overall tally to 3,74,641.

As many as 11,610 people have died so far in the city. Mumbai’s two neighbouring cities Navi Mumbai and Kalyan-Dombivli- reported 566 and 929 new cases respectively.

In Nagpur city of Vidarbha region 2,965 new cases were found.