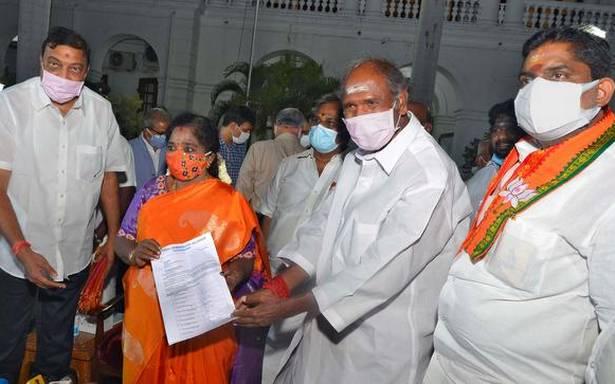 The swearing-in of the N. Rangasamy-led National Democratic Alliance government in the Union Territory is likely to take place on May 7 or 9.

Sources in the All India N R Congress and BJP told The Hindu that Mr. Rangasamy would decide on the date and time of the swearing-in in a day or two. “Most likely, the swearing-in of the Chief Minister and Ministers will take place on May 7 or 9,” a senior AINRC leader said.

Mr. Ranagasamy, along with BJP-in charge for the Union Territory Nirmal Kumar Surana, and Member of Parliament (Rajya Sabha) Rajeev Chandrasekhar, on Monday evening met Lt Governor Tamilisai Soundararajan to stake claim to form the government. This followed both the parties together gaining a majority of 16 seats in the 30 member Assembly in the polls.

According to a highly-placed source in the BJP, the party was likely to get the Deputy Chief Minister’s post and two Ministers. The party was also pressing for the post of Deputy Speaker, the source said.

As per the UT Act, the Legislative Assembly, with a total strength of 30 could have 6 cabinet members, including the Chief Minister. The Act puts the Ministry’s strength at 15 per cent of the total legislators.

The source said the Centre may also appoint three nominated legislators before the swearing-in. In such a scenario, the strength of the Assembly would go up from 30 to 33 and proportionally the number of cabinet ministers would go up by one, the source added.

The party had also put up a demand with the AINRC to decide on the portfolios before the swearing-in ceremony. “Discussions are on, pertaining to the swearing-in. Everything will be finalised shortly,” he added.