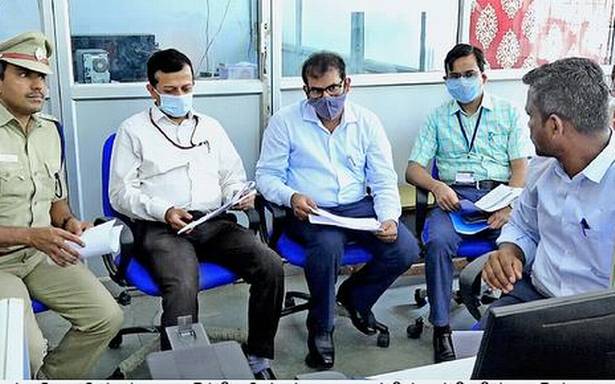 A total of 1,071 police personnel will be stationed in the 1,071 polling stations on the polling day on April 6. The randomisation of duty for police personnel for the six Assembly constituencies was carried out at the Collectorate.

The randomisation of duty for police personnel for the Assembly constituencies of Uthangarai, Bargur, Krishnagiri, Vepanahalli, Hosur and Thally was completed in the presence of Collector and District Election Officer V. Jayachandra Bhanu Reddy and general observers P.D. Palsan (Uthangarai and Bargur), and Partha Sarthi Sen Sharma (Krishnagiri and Vepanahalli) and police observer Sunil Bhaskar and Superintendent of Police Bandi Gangadar.

A total of 3,700 police personnel will be deployed for polling duty in the district, which includes deployment in the polling stations and centres.

Randomisation of poll duty was carried out under the aegis of Collector and District Election Officer S.P. Karthika and police general observer Chakkirala Sambasiva Rao at the Collectorate for 1,817 polling booths in 870 polling centres here. Superintendent of Police Pravesh Kumar was present.

In Erode district, randomisation of 13,160 polling personnel, who will be involved in the polls in the eight Assembly constituencies, was held at the Collectorate on Saturday.