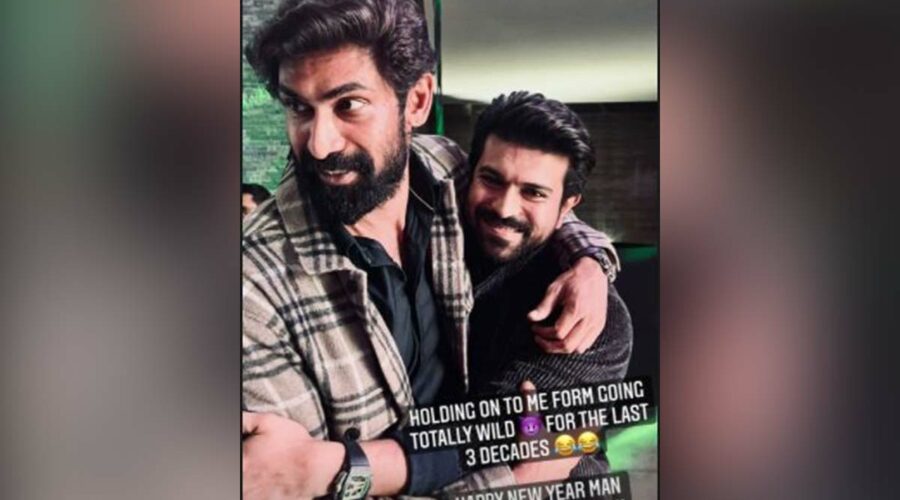 On the occasion of new year, Baahubali and  The Ghazi Attack fame Rana Daggubati took to his Instagram stories to share a photograph with  mega power star Ram Charan.  Rana wrote, “Holding on to me from going totally wild for the last 3 decades. Happy New Year Man Ram Charan. In the photo,  Ram Charan and Rana Daggubati are seen  hugging each other.  It is known that both Rana and  Charan are childhood friends. Both went to the same school together in Chennai.

Ram Charan’s wife Upasana was their junior in the same school whereas Stylish Star Allu Arjun‘s wife Sneha was their classmate. Their friendship has always been the talk of the town.

Meanwhile, Ram Charan will be seen playing the lead role in an upcoming big budget drama RRR. But yesterday SS Rajamouli officially confirmed that the release of the film which is bankrolled by DVV Danayya, has been postponed  amidst the rising COVID-19 cases.

The makers of RRR released a statement that read: Inspite of our relentless efforts, some situations are beyond  the  control. As many Indian states are closing  the theatres, we are left with no choice but to ask you to hold on to your excitement. We promised to bring back The Glory of Indian Cinema, and at the right time, we will.”

On the otherside, Rana Daggubati will be seen in Virata Parvam.