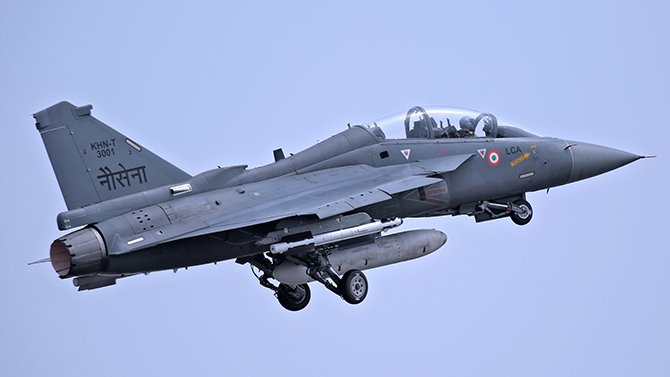 According to defence ministry sources, he will take a flight in the Tejas light combat aircraft in Bengaluru, and then travel to Mumbai for milestones in India’s shipbuilding programme.

After that, the defence minister will sail out on the navy’s aircraft carrier, INS Vikramaditya.

At night he will witness naval operations at sea, returning to Mumbai the next day.

The launch of INS Nilgiri sets the stage for building seven frigates for a total cost of Rs 45,000 crore.

With the Mazagon Dock Ltd, Mumbai building four and Garden Reach Shipbuilders and Engineers, Kolkata building three frigates, all seven are scheduled to join the navy’s fleet between 2022 and 2025.

The navy has decided to name Project 17A warships after the six frigates of the Leander class — the first warships built entirely in India.

Following INS Nilgiri, which the MDL delivered in 1972, the navy commissioned the Himgiri, Dunagiri, Taragiri, Udaygiri and Vindhyagiri.

All these are now decommissioned.

Nilgiri was sunk on April 1997 by a Sea Eagle missile fired by a Sea Harrier fighter, operating off the aircraft carrier INS Viraat.

However, these six frigates will be reborn in the navy through Project 17A.

The seventh and last frigate will get a brand new name: INS Mahendragiri.

The Project 17A frigates will be 6,500 tonnes each, and amongst the most heavily armed frigates anywhere.

Each will carry eight BrahMos supersonic anti-ship missiles to destroy enemy ships and land targets at ranges of up to 300 kilometres.

A complement of 32 Long Range Surface to Air Missiles will protect them from enemy aircraft and anti-ship missiles.

They will mount the Mark 45, 127-millimetre Naval Gun System to engage surface targets out to 36 kilometres.

And they will also carry torpedoes to sink enemy submarines and surface ships.

Given the navy must meet on-going payments for warships like INS Nilgiri, INS Khanderi and INS Kavaratti — the anti-submarine corvette that Garden Reach Shipbuilders and Engineers is likely to hand over to the navy this year — naval planners are making a strong pitch for restoring the navy’s traditional share of the defence budget.

“We will be seeking more money… Our endeavour is to ask for a higher share of the capital budget, which has also dropped in the last six-to-seven years. The navy’s budget share was about 18 per cent in 2012-13. Today it stands at about 13.66 per cent. We will try to convince the powers-that-be to enhance this share within the overall services budget,” stated Kumar, the navy’s vice chief.