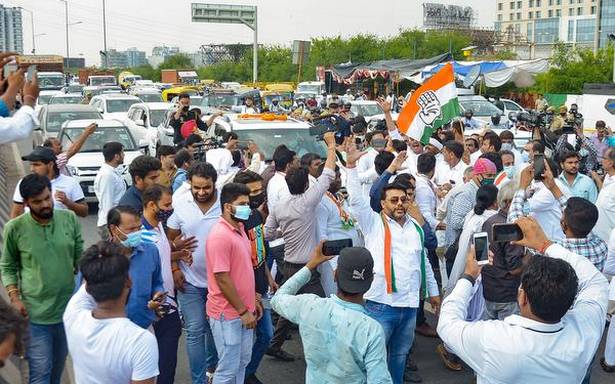 They drop the plan for march to Lakhimpur Kheri

The Congress party workers, led by Rajasthan unit president Govind Singh Dotasra, staged a massive demonstration at Bharatpur district’s Uncha Nagla village near the border with Uttar Pradesh on Thursday. The agitation was in protest against the violence in Lakhimpur Kheri, in which eight persons were killed. The demonstrators raised slogans and burnt an effigy.

The protesters had earlier planned to cross the inter-State border, march towards Lakhimpur Kheri and court arrest if stopped, but the plan was dropped at the last moment. Mr. Dotasra said since the U.P. government had released Congress leader Priyanka Gandhi Vadra after her detention, the march had been withdrawn.

Mr. Dotasra said the “misbehaviour” of the U.P. police with Ms. Vadra, who wanted to meet the families of victims, was condemnable. “We have expressed our solidarity with the farmers who should get justice. There is a complete anarchy in Uttar Pradesh,” he said, while addressing the gathering.

The Pradesh Congress president said the farmers had been agitating for the last 10 months against the Centre’s agriculture laws, but the top leaders of the BJP government at the Centre had no time or inclination to meet them. “Neither a farmer leader nor any political party had sought the enactment of these laws. Why were they brought in?” he asked.

The Congress party’s chief whip Mahesh Joshi and Deeg-Kumher MLA Vishvendra Singh were among the party leaders present at the demonstration.