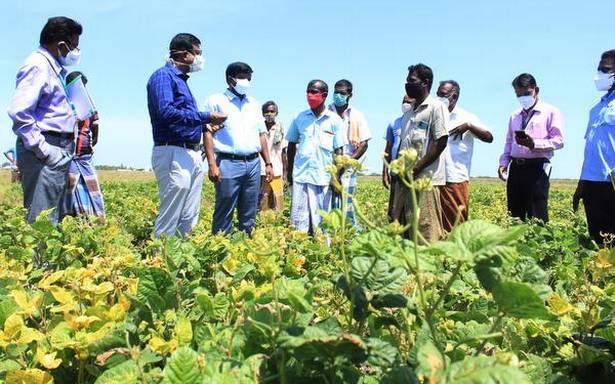 Encouraged by officials led by Collector, they raise second crop

Five months ago, when Ramanathapuram district experienced excess rainfall, the authorities led by Collector Dinesh Ponraj Oliver ensured that the water was not wasted.

Once the water was saved in the tanks, officials from the Agriculture department swung into action. Inviting the farmers was accorded top priority. When they assembled, the Collector interacted with them and encouraged them to take up a second crop as they have copious water in storage.

Slowly, the interactions appeared to have borne fruit as many farmers have come forward to go for a second crop.

Arid Ramanathapuram district is witnessing a change. Now, there is green cover in remote villages due to the presence of ater bodies and awareness programmes on water conservation.

The district has 1,694 tanks – 502 PWD tanks and minor irrigation tanks. Mr. Dinesh wants to transform the arid district into a place with potential for raising multi-crops. Encouraged by government subsidy, 2,214 farmers cultivated 2,766 acres against the targeted 5,000 acres, raising cotton, millets and other crops. The farmers were encouraged to shift from conventional paddy to other varieties which required less water for irrigation.

With a majority of the farmers having harvested their crops, Mr. Dinesh visited Achunthanvayal and commended the farmers, and also officials led by Joint Director Tom Sylus and Additional Collector M. Pradeep Kumar for their guidance.

The farmers produced 9,400 quintals of different types of grains and cotton. On an average, they would have earned ₹12,000 to ₹15,000 each from the second crop.

Attributing the success to the team work and support from farmers, Mr. Dinesh exuded confidence that they would repeat the performance next season also but with a higher target.