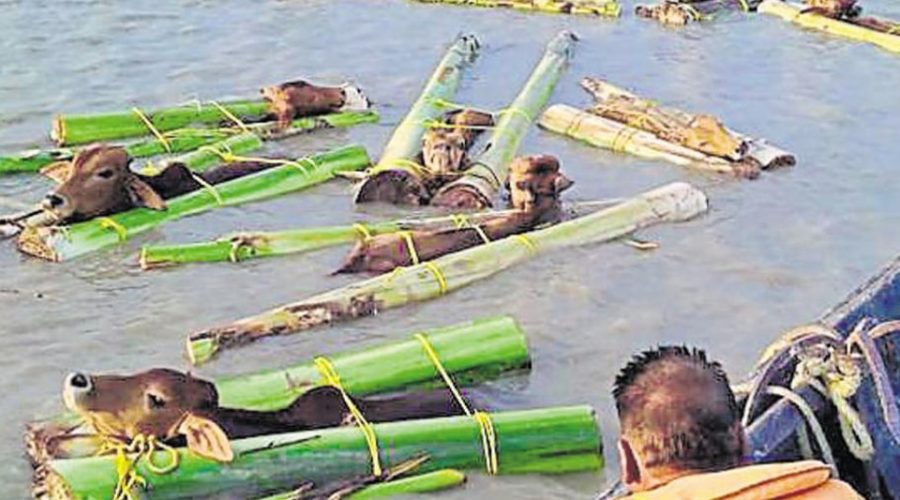 Incessant rains in Bihar may be causing misery to the people in the state but for cattle smugglers in Bengal, it is turning out to be a business opportunity.

On the intervening night September 28 and 29, Border Security Personnel seized more than 125 cattle from Malda and Murshidabad districts in Bengal while these were about to be taken across to Bangladesh through the Ganga river that is in spate due to incessant rains in Bihar.

“On Saturday night BSF personnel spotted some smugglers along with cattle near Madanghat area under Bhagabangola police station in Murshidabad district. After chasing the smugglers, the BSF men managed to nab an Indian cattle smuggler, Aasif Sarkar (20), a resident of Mahesh Naryanganj with 10 cattle,” said a BSF officer on conditions of anonymity.

However, more than 20 smugglers managed to swim across the Ganga river with 200-odd cattle, giving the BSF personnel the slip.

A smuggler gets about Rs 4,000 for successfully transporting each cattle across the border.

A senior officer of the BSF said that smugglers are trying to send more cattle to Bangladesh taking advantage of the increase in water levels in the Ganga. Cattle are being dropped from different points under Baishnabnagar and Shamserganj police station areas. The current of the river is such that if the cattle reach Bangladesh on their own simply by staying afloat in the water.

Another officer of the BSF said that on Saturday night a large number of cattle were dropped in the water from different points at Sovapur area in Malda and Nimtita in Murshidabad. The BSF men managed to seize as many as 121 cattle from these areas.

Yet, a large number of cattle managed to reach Bangladesh.

“From January 1 till September 29 this year, we arrested 218 Indian cattle smugglers under South Bengal Frontier. Most of the arrests were made in Malda and Murshidabad. The number of cattle seized during this period stood at 23,572, with more than 80% of the seizures taking place in Murshidabad and Malda,” said an officer.

Incidentally, sending cows through the rivers is not new. A few months ago this method of transporting the cattle caught the attention of the BSF personnel. Each cattle head is placed in between two banana tree trunks that are bound together, so that the animal does not die. Then these animals are pushed in the water from points where the drift of the river takes them to the other side of the river.

“The river is so wide that it is not easy for anyone to chase and seize cattle using boats. Moreover, smugglers prefer to send cattle after dark to avoid detection,” said an officer in July.

“The smugglers are dropping the cattle mainly at points where the river is very wide (more than 700-800 metre) making it almost impossible for BSF personnel to seize all the cattle in a short span of time. The current in the water is taking some cattle to Bangladesh before these could be captured,” said a BSF officer on conditions of anonymity.