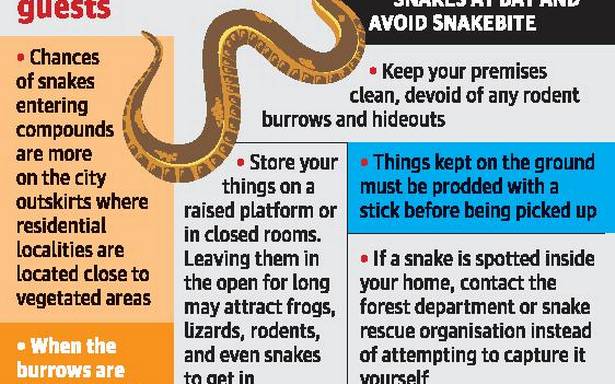 Flooding caused by heavy rain is perturbing not just for human beings but also for creepy-crawlies and dangerous reptiles which are forced to come out of their natural habitat in search of a safe haven. The chances of encountering a snake is quite high in this season, increasing the likelihood of human-reptile conflict.

In the past eight days, when it rained in and around the city, volunteers of Friends of Snakes Society rescued 178 snakes, including some venomous ones. They included 98 spectacled cobra, 25 rat snakes and 25 checkered keelback among others.

Most distress calls were from people living on the outskirts of the city. The snakes were rescued from Beeramguda, Nizampet, Kukatpally, Lingampally, Patancheru, Hayathnagar, Vanasthalipuram, L.B. Nagar, Nagole, Attapur, Raidurgam, Shaikpet, Damaiguda and Rampally.

General secretary of Friends of Snakes Society, Avinash Visvanathan said most snakes rescued by the volunteers are found outside homes but inside compounds. To keep themselves warm and dry, the cold-blooded reptiles hide under just anything — a pile of wood, bricks, construction debris or under the staircase. He said that the snakes entered homes only in a few cases when there was a gap under the door.

“The society receives over 100 calls on its helpline every day, requesting assistance with removing snakes that enter residences or office spaces. With the help of over 150 well-trained volunteers, the organisation safely rescues the animal and relocates them to forest areas away from human habitation, with the help of Telangana Forest department,” Mr Avinash said.

Till June 30 this year, despite the lockdown, members of the society rescued and relocated 4,793 snakes from various districts of Telangana.

07/19/2021 India Comments Off on Rain, flooding force snakes to slither into homes
India