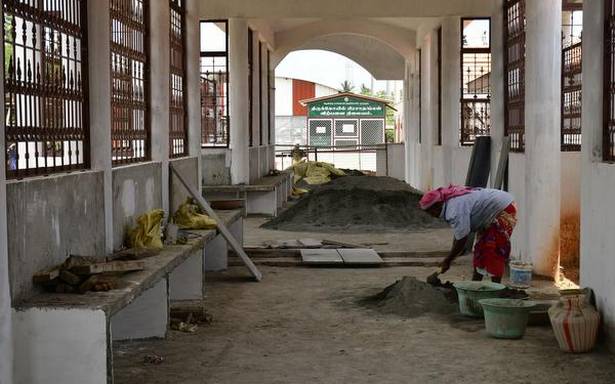 It is modelled after Tirumala temple

The Hindu Religious and Charitable Endowments (HR&CE) plans to complete the queue complex — partially resembling a similar structure at Venkateswara Temple at Tirumala — at Mariamman Temple in Samayapuram by September.

During weekends, holidays and festival days, the temple on the outskirts of the city receives 50,000 to one lakh devotees. It becomes a major issue for the temple management to regulate and control the surging devotees on auspicious days and peak hours. To address the issue, the temple administration began a project to construct a queue complex with waiting rooms, toilets and multimedia facility for the devotees in 2019. It allotted a sum of ₹13.8 crore for the project.

As per the plan, the project will have two queues for darshan — free and paid. The queue complex has a built-up area of 22,000 sq ft. The queues, with entrance near Mariamman Mandapam and exit near the Rajagopuram, can accommodate 5,000 devotees at any time. Concrete benches have been provided at the waiting halls for devotees to take rest while waiting for their turn to have a darshan of Goddess Mariamman.

Twelve toilets and eight urinals have been provided at various points for the use of the devotees. Provision has also been made to play audio and video about the history of the temple.

P.K. Sekarbabu, Minister for Hindu Religious and Charitable Endowments, who inspected the progress of ongoing works at the temple a few days ago, is believed to have instructed the officials to complete the works within two months. As per his instructions, pending works have been expedited.

S. Kalyani, Joint Commissioner of the Temple, told The Hindu that the queue complex work had reached the final stage. Besides marble-laying and electrical works, painting had been started. It had been decided to complete all works within August or September. The queue complex would be thrown open to the public in September.

She said construction of three cloakrooms, a parking lot and a restaurant were also part of the project. They have already been constructed. The parking lot would be able to accommodate 50 cars, 30 vans, 20 buses and 75 two-wheelers.