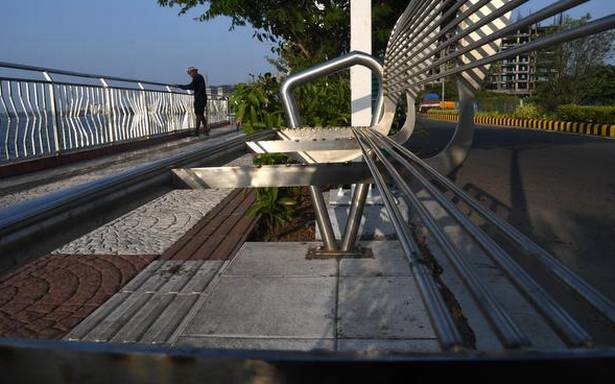 It follows complaints of waste dumping and proliferation of stray dogs

The 1.80-km-long Queen’s Way along Chathiyath Road is set to get the much-needed facelift with additional amenities amid widespread complaints by regular users about indiscriminate dumping of waste and proliferation of stray dogs along the walkway.

Ever since the beautified walkway was opened to the public six years ago at an investment of ₹5 crore by the Tourism Department at the initiative of then Ernakulam MLA Hibi Eden, it has emerged a popular joint for joggers, cyclists, and families looking to have a peaceful outing.

However, the place has taken a hit over the years, with many of the imported non-corrosive chairs turning unusable thanks to miscreants who have stolen their steel rods. At the heart of the problem lies the absence of an agency responsible for proper maintenance and upkeep of the place.

“The Goshree Islands Development Authority (GIDA) earns revenue from the amphitheatre and renting out space for film shootings. It is natural for the agency to use the money for maintenance of the space, and I am about to approach the District Collector with such a proposal. The chairs in bad shape will be repaired using single-piece stainless sheet at a cost of around ₹1.50 lakh in a week,” said Mr. Eden.

Separate container toilets for men, women, differently-abled, and transgenders, a long-standing demand of regular users of the walkway, are also being planned in association with CREDAI using the corporate social responsibility (CSR) funds of the Cochin Shipyard. CREDAI will be entrusted with the upkeep of toilets by charging a nominal fee from users.

As of now, the upkeep of the place is done in association with three separate apartment complexes in the area, with each assigned a stretch of 600 metres each. However, they cannot undertake maintenance and repair work of facilities like the amphitheatre and open gym for which GIDA should be roped in, said Mr. Eden.

Ranjith Thampy, a social activist intervening in the upkeep of public spaces, said the proliferation of stray dogs posed a serious menace but has been overlooked so far only because there have been no instances of dog bite.

“Dumping of waste, including industrial waste, is rampant along the service road opposite the walkway where vehicles are parked. Though there are CCTV cameras along the stretch, the feed from them is unavailable to GIDA. I even doubt whether those cameras are working any longer,” he added.

The network of CCTV cameras was installed at an investment of ₹14 lakh from Mr. Eden’s MLA fund.