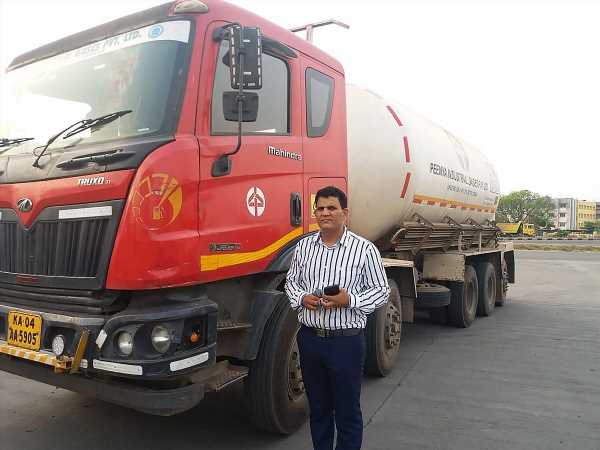 ‘We must work for the country.’
‘I have earned money here and I must give it back.’
‘I don’t think it is charity; I think it is my duty.’

Khan, whose two daughters are married and whose father has passed away, lives with his mother, two brothers and a sister.

Khan started his business career selling oranges to passengers in trains at Nagpur railway station in 1994. Through sheer hard work and his family’s support, soon he graduated to driving an autorickshaw, which he did for six years.

In 2004 he bought his first truck. And since then Khan has not looked back.

His company collects toll at five toll plazas and also owns two petrol pumps. The company transports goods by rail, road and containers. Apart from India, it also does business in Nepal, Bhutan and Bangladesh with the RPG group.

“Last year during the pandemic I spent Rs 80 lakh (Rs 8 million) preparing and distributing food for the affected people,” Khan tells Rediff.com‘s A Ganesh Nadar. We ran a kitchen for four months. I also donated over Rs 3 lakh (Rs 300,000) to the prime minister’s relief fund. I have always been involved in social work.”

“At that time there was no publicity, but now I am getting phone calls from newspapers in other countries,” he adds.

Khan says he decided to help when he realised that there was a shortage of oxygen in hospitals in Nagpur. He usually gives his Ramzan donation — zakat — to mosques. This year he decided to spend it instead on oxygen as it was the need of the hour.

When he decided to help, the first step was to get oxygen tankers. Union Transport Minister Nitin Gadkari, who is the MP from Nagpur, helped him source 12 oxygen tankers.

“I spent a crore paying for them and now the collector is paying for them,” he says, upset that oxygen suppliers had increased rates in the pandemic but nevertheless he paid because he wanted to save lives.

He says he will continue with the good work whenever it is needed. According to him every citizen should stand with the government to help.

“There is a shortage of oxygen in various parts of the country, but there is no shortage in Nagpur now,” he says.

After seeing his work, three other businessmen also came forward to pay for one oxygen tanker each.

According to Khan the country will not progress if people want to earn money during the pandemic. “We can earn money at other times,” he says. “We must work for the country. I have earned money here and I must give it back.”

And what is Khan doing now? He is sourcing five oxygen cryogenic containers from Germany — proving that there is no stopping a good man.