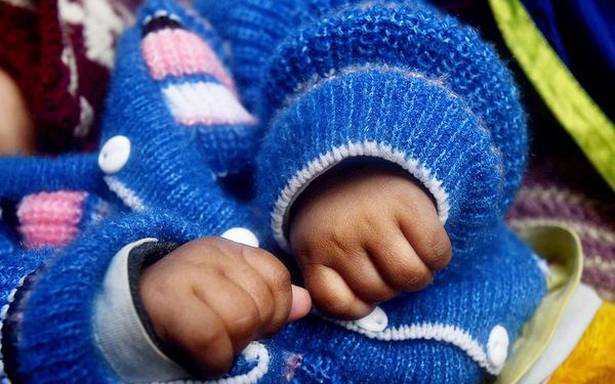 Nazma’s* son was just a day old when she told her estranged mother, a midwife, that she would not be able to raise her baby. The 28-year-old mother of five knew that the monthly income as an erickshaw driver of her husband, who was an alcoholic and often beat her up, was not enough to take care of another member in the family.

In less than a week, she chose to hand over her infant to a family in west Delhi. She only wished for a good family to raise her son. She received ₹2,00,000 in return.

Rekha, whom Nazma’s mother knew, helped her in this arrangement. “When I reached the appointed place in Uttam Nagar, Rekha was there with a couple who took my child and kissed him in front of me and then Rekha took money from the couple and surprisingly gave it to me,” she said.

The Hindu met more families like Nazma’s who — driven by poverty — chose to give away their newborns. The Delhi police recently busted the gang of women who were running a racket of selling newborn babies in the city. Their modus operandi involved preying on pregnant women from economically weaker sections who were willing to give away their babies for ₹50,000 to ₹2 lakh, as their circumstances did not allow them to raise another child.

In Nazma’s case, her husband’s “refusal to take contraceptive measures and her inability to undergo tubectomy owing to her religious faith” made her situation difficult. While she wasn’t looking for any monetary gain in this, Chandni*, residing in north Delhi, was in dire need. Into her seventh month of pregnancy, the mother of three realised it wouldn’t be easy to raise another child. She was already struggling with the medical expenses of her four-year-old son with breathing issues. She confided in her sister-in-law Rashmi*, an egg donor at an IVF centre in Patel Nagar. Chandni knew Kajal, an employee at the IVF centre. Kajal assured her of taking the newborn provided the baby was handed over within 10 days of birth.

Chandni’s husband, a drum player at weddings and a daily wager, was against his wife’s decision as he wanted to keep their son. But Chandni insisted on giving the child away in exchange for money as that could be used for treating their other son.

“I asked Kajal if I would be able to see my child later but she refused. She did not share any details about the family either, only told us he will go to a good family,” she said.

Ten days after her son’s birth in April, Chandni, along with Rashmi, went to meet Kajal. “She met us in a park in east Delhi, took my baby and returned with ₹2,00,000. “After that day, she stopped taking my calls when I tried to reach her to enquire about my baby,” she said.

Jyotsna’s* fifth pregnancy was unwanted. Her neighbour Anjali – whose role is being investigated — advised her against abortion and told her to give the baby to a family in need. She also told Jyotsna that her brother and sister-in-law would adopt her child.

Post-delivery in November, Jyotsna changed her mind and decided to keep her baby boy. Anjali convinced her and the child was eventually handed over to a couple. Anjali became incommunicado thereafter.

When the Delhi police unearthed the racket, Jyotsna came to know that the couple who had taken her baby was not Anjali’s brother and sister-in-law but her second husband and a friend who reportedly sold the child to another couple. The child hasn’t been traced yet, the police said.

The illegal adoptions came to light when Deputy Commissioner of Police Rajesh Deo’s team received a WhatsApp message from an informer about infants being bought and sold.

A senior officer said the district police decided to investigate the case since children were involved.

With Sub-Inspector Anita as the investigation officer, three women were arrested on December 17, followed by two more the next day and the sixth woman was arrested a few days later.

According to the police, Kajal was the mastermind of the racket along with Priyanka, who is absconding. The others are Priya, Priya Jain, Rekha, Premvati and Shivani alias Bittoo, who were all working in the health sector.

These women often took ownership of newborn babies, kept them in their homes till they found a family for adoption, the police said. They would feed the newborns powdered milk but in one case, one of the suspects, according to the officer, was a lactating mother and she alone fed the child she had procured.

According to investigators, after these women procured the babies, they dressed them in “appealing clothes”, took videos and photos and circulated them in their circles and to prospective buyers. The selling price of a child was usually between ₹5 lakh-₹6 lakh, of which ₹1 lakh-₹2 lakh was given to the biological mother. The rest of the money was kept as a commission by the procurers. The women contacted each other only through mobile phones and met at the IVF centres to avoid suspicion.

According to the police, the women believed they were doing no wrong but helping childless couples. The police have so far recovered three children and located 10 more. An officer said some of the children have been placed in affluent families while their biological parents struggle to make ends meet. “The unearthing of this racket also presents a moral dilemma,” said Special Commissioner of Police Devesh Chandra Srivastava. “But we have to work under the ambit of law.”

Mr. Deo said the economically weaker sections also needed to be made aware of the racket of selling their children illegally.