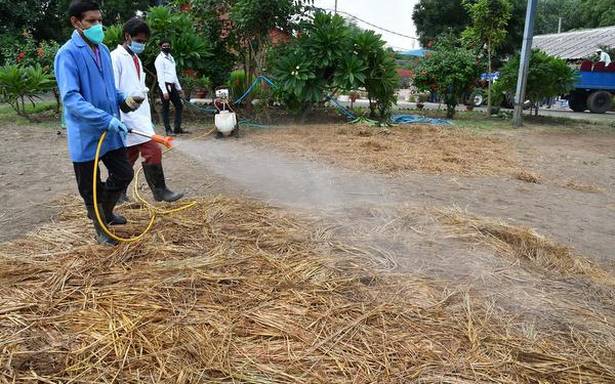 Delhi Environment Minister Gopal Rai on Friday said Punjab, which generates around 20 million tonnes of paddy straw annually, will become free from stubble burning if the Aam Aadmi Party forms the government in the State.

The Assembly election in Punjab is slated for early next year.

Mr Rai said Delhi has provided a solution to the problem of stubble burning in the form of microbial solution Pusa bio-decomposer and it will be distributed for free in all Punjab districts like the AAP government has been doing here.

"Punjab will become free from stubble burning if AAP forms a government in the State. We will rope in the district administrations in Punjab and spray Pusa bio-decomposer in fields for free like we have been doing in Delhi," Mr Rai told PTI.

"It’s not so tough (spraying bio-decomposer on lakhs of acres of land). You only need the willpower to do it. We will do it positively," he asserted.

This won’t be as expensive as other measures being taken for crop residue management, the minister added.

Punjab, Haryana and Uttar Pradesh attract attention during the paddy harvesting season between October 15 and November 15 as farmers set their fields on fire to quickly clear off the crop residue before cultivating wheat and potato.

It is one of the main reasons for the alarming spike in pollution in Delhi-NCR.

Despite a ban on stubble burning in Punjab and Haryana, farmers continue to defy it as there is a short window between harvesting paddy and sowing wheat. The high cost of manual or mechanical management of straw is a major reason why farmers choose to burn stubble.

On October 5, the Delhi government started spraying Pusa bio-decomposer, a microbial solution that can turn stubble into manure, over 4,300 acres belonging to 844 farmers in Delhi. Last year, 310 farmers had used it on 1,935 acres of land.

In Punjab, paddy is cultivated on 2.814 million hectares of land.

According to officials, UP is using the bio-decomposer in 10 lakh acres of area, Punjab in five lakh acres and Haryana in one lakh acre of land.

10/08/2021 India Comments Off on Punjab will be free from stubble burning if AAP comes to power: Delhi Environment Minister
India