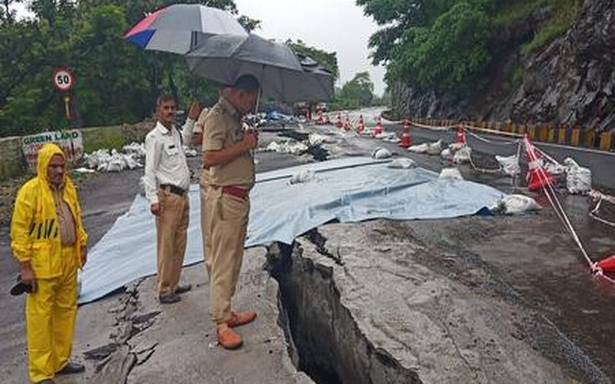 There are blockages at several points on the highway.

The Pune-Bengaluru stretch of the National Highway 48 will remain closed for a few days for traffic. This is due to blockages at several points on the highway.

There was a landslide near Kognoli in Maharashtra on Monday evening and flooding of the road near Kolhapur, Kakati, and Yamagarni villages along the way on Tuesday following heavy rains in western Maharashtra and north Karnataka.

Maharashtra police stopped traffic and communicated to the Karnataka police. The vehicles were stopped for about four hours on Monday night before police cleared debris on one side. Commuters used it for a few hours by riding on one side. But then, water from nearby mountains flooded parts of the highway near Kakati Tuesday morning, making travel risky. Flooding on either side of the border led to police erecting the barricades again.

The Belagavi police requested all the check posts and toll booths along the Bengaluru- Belagavi route to stop and send back all vehicles headed to Kolhapur- Pune or Mumbai. “We are advising people to put off travel on this route for a few days. It may cause some inconvenience, but it is better to take precautions,’’ SP Lakshman Nimbargi said.

Residents of villages along the road, who are well versed with interior roads, are using alternative routes via Nippan Chikkodi, Ichalkaranji, Rashiwade and other villages. However, police are advising first-time travellers to avoid village roads as there is a possibility of flash floods in streams and tributaries nearby.

“We hope to reopen the highway in one or two days,’’ Raghavendra Suhas, Inspector General of police (northern range), told The Hindu. “We are waiting for the rain to subside to flush out water from the road. Boulders or mud collected on the road due to rains will also be collected. We are waiting for the rain to stop for a few hours to take up cleaning up of the road,’’ he said.

The road is part of the ambitious Golden Quadrangle project. Before 2010, the Delhi Mumbai stretch was numbered NH 8 and the Mumbai-Chennai stretch was called NH 4. The whole stretch of around 2800 km is now called NH 48. It originates at New Delhi, passes through Jaipur, Udaipur, Ahmedabad and Surat before reaching Mumbai. It connects several important cities and towns in north Karnataka and is popular as the Pune- Bengaluru National Highway. It is among the longest roads in the country and passes through Delhi, Haryana, Rajasthan, Gujarat, Maharashtra, Karnataka and Tamil Nadu. It serves as an important freight corridor for goods transport between north and south India.