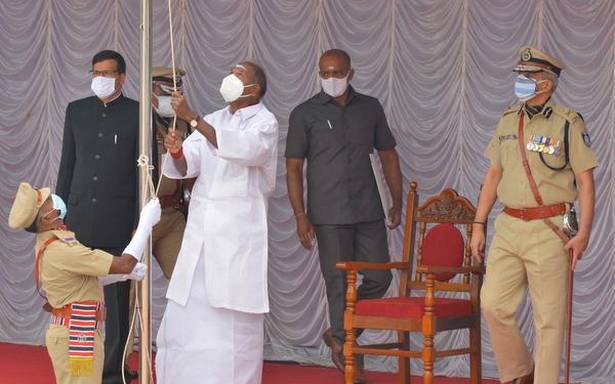 The cameras will be installed with smart poles, outfitted with several other features including Wi-Fi, and electric vehicle charger

The entire Puducherry town would come under the surveillance of Closed Circuit Television(CCTV) cameras at a cost of ₹60 crore under the Smart City programme, Chief Minister N. Rangasamy said on August 15.

The move comes as part of the efforts to improve law and order and maintain peace, the Chief Minister said, while delivering his Independence Day address after unfurling the national flag at Gandhi Thidal.

Cameras would be installed with smart poles, fitted with Wi-Fi facility, electric vehicle charger, air quality monitoring equipment, facility for emergency phone call and electric lights. A control room would be set up on the premises of Anglo-French Textiles (AFT) to monitor the camera footages. The control room would be manned by around 100 personnel belonging to the departments of Police, Traffic, local administration, Public Works and Transport, the Chief Minister said.

Listing out the priorities of his government, the Chief Minister said the process to fill around 10,000 vacancies in various departments has been expedited.

Additionally, steps are being taken to re-open the AFT mill with private partnership, and the dues of mill workers would be paid, the Chief Minister informed

In the current financial year, work to provide multi-level car parking project at Old Jail Complex and Old Port would be taken up. The government would open the newly constructed Kamaraj Manimandapam very shortly, he added.

He also conveyed the government decision to increase monthly pension for physically challenged and fishermen by ₹500.

Stating the intention of his government to increase the livelihood means of farmers, he said PONLAIT (Pondicherry Co-op. Milk Producers’ Union Ltd) has entered into an agreement with National Dairy Development Board (NDDB) to increase the capacity of the ice cream producing plant from 10,000 litres per day to 20,000 litres per day. The project would cost around ₹12. 95 crore of which ₹10.36 crore was interest-bearing term loan from NDDB and balance share of PONLAIT.

He also said water quality monitoring buoy had been deployed in Puducherry coast last month by the National Centre for Coastal Research, an autonomous body under the Ministry of Earth Sciences. The buoy would assess quality of coastal water in Puducherry on a real time basis. The data collected would be helpful for policy makers, environmentalists and fishing community.

On his arrival for Independence Day celebrations, the Chief Minister was given a guard of honour by the territorial police. The venue for the celebrations was shifted this year from Indira Gandhi Sports Complex to Gandhi Thidal for better crowd management due to COVID-19. Home Minister A. Namassivayam, Speaker R. Selvam, legislators and senior officials attended the function.

The Independence Day celebration at Mahe was presided over by Minister for Public Works K. Lakshminarayanan, in Karaikal by Transport Minister Chandira Priyanga and in Yanam by Civil Supplies Minister A. K Sai J Saravana Kumar.