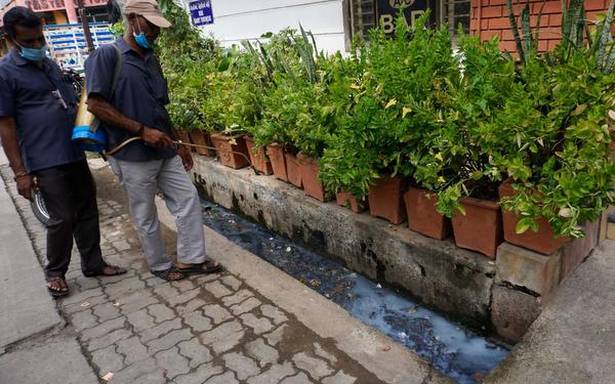 One death has been reported so far, and in the last 23 days, 348 cases of dengue were reported in various healthcare centres across Puducherry

Health authorities are on an overdrive after the number of dengue cases showed a substantial rise in Puducherry this month. One death has been reported so far, and in the last 23 days, 348 cases of dengue were reported in various healthcare centres across Puducherry.

A 55-year-old person, a cook by profession and resident of Bahour, succumbed to the vector-borne disease a few days ago.

“We have seen an increase in the number of cases this month. The Health Department has started various measures on its own with larvicidal activity and is also working with civic agencies to prevent mosquito breeding,” G. Sriramulu, Director of Health and Family Welfare Services, told The Hindu.

The Indira Gandhi Government General Hospital and Research Institute has currently around 22 dengue patients. It has opened a 24-bed special fever ward with the scope to increase the capacity in case of a spike in cases. Similarly, the Government Medical College has opened a 60-bed fever ward and has got 4 patients undergoing treatment for dengue.

Mr. Sriramulu urged residents to immediately report to hospital in case of symptoms such as fever accompanied with headache and body pain, pain behind eyes, rashes and vomiting. In certain rare cases, there will be respiratory symptoms and bleeding.

“It is very important that people consult a physician at the earliest. In the case of dengue death reported from Bahour, the feedback we received was that he came late for treatment. So, it is very important to get tested and get appropriate medical treatment,” he said.

The Health Department has written to the civic authorities to prevent accumulation of waste including plastic and other items which could store water, he said adding that the dengue mosquito could only breed in fresh water.

Residents should take all precautions to keep their surroundings clean and make sure water does not collect and stay stagnant in their premises.

The Department has stocked adequate medicines for treatment. The Health Department has decided to handover fogging machines to Ariankuppam and Villianur Commune panchayat to intensify the drive against mosquito breeding, he added.

The biggest spike in dengue was reported two years ago, when monthly cases reached the 1,000 mark, he said.