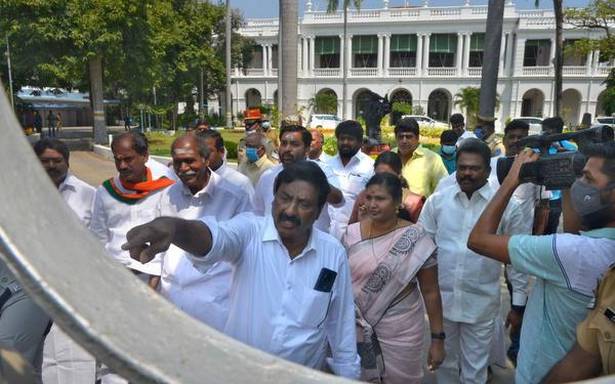 Opposition parties AINRC, AIADMK and the BJP have asked the ruling Congress-DMK combine to prove their majority on the floor of the house.

Speaking to reporters after submitting a memorandum to the Lt Governor at the Raj Nivas on Wednesday seeking the convening of the Assembly for a floor test, Opposition leader N. Rangasamy said the strength of the Congress had come down in the Assembly after the recent resignations of legislators and the disqualification of another ruling party member.

The Congress-DMK has only got 14 members in the 28 member house which is on a par with the strength of the Opposition in the Assembly, he said.

AIADMK leader A. Anbalagan said the 14 included the Speaker and when compared to the Congress, the Opposition has a higher strength. The Speaker can only vote in case of a tie, he added. The government has lost the moral right to run the administration after the resignations of Ministers and legislators, he said. The Opposition has submitted a list of 14 legislators supporting the AINRC, AIADMK and BJP, he added

When asked about the relevance of submitting memorandum when the incumbent Lt Governor Kiran Bedi has been removed, Mr. Anbalagan said it was submitted to her Officer on Special Duty and Additional Secretary.