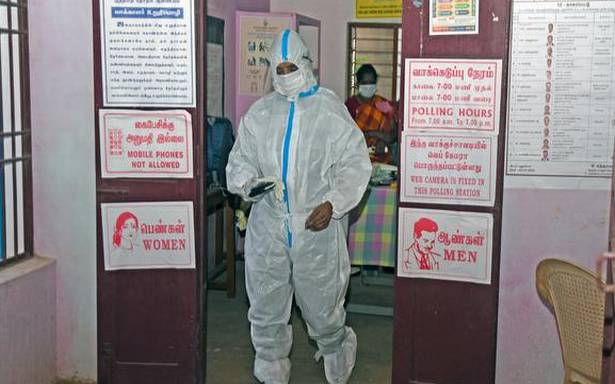 After a sedate start, polling to elect the 15th Puducherry Legislative Assembly gathered pace over the course of the day in 30 constituencies across the Union Territory (UT) to finish at an overall voter participation rate of about 78% on Tuesday.

According to election officials, the polling figures are provisional and subject to finalisation later. The turnout is lower than the 85.08% in 2016 and 85.52% in 2011.

The process was by and large peaceful barring the odd complaints about temporary EVM snags in a few polling stations and minor protests over canvassing of votes near booths.

The fight for the 30-seat Assembly (which also has three additional nominated legislators) is essentially between the Congress-led alliance comprising DMK, CPI and VCK and the NDA consisting of the AINRC, BJP and AIADMK.

The Congress is contesting in 14 seats [of the 15 seats it apportioned for itself in the alliance], DMK 13, VCK and CPI one each.

The CPI(M), which was not allotted any seat, has fielded a candidate in Muthialpet constituency.

In the rival camp, the AINRC is fielding candidates in 16 seats, BJP in nine and AIADMK in five. The PMK, which is not contesting, has extended support for the NDA.

The 324 candidates in the fray also include nominees of smaller parties such as Amma Makkal Munnetra Kazhagam, Naam Tamilar Katchi and Makkal Needhi Maiam apart from several Independents.

The turnout in the five reserved constituencies of Thirubuvanai, Oussudu, Embalam, Nettapakkam and Nedungadu averaged between 80 and 85%. The heaviest polling was reported from Yanam (85.76%), where the Congress did not contest, and the lowest in Raj Bhavan (70.11%).

The last votes of the day were cast by COVID-19 patients who were allowed to cast votes in designated polling stations wearing PPE gear.

In all polling stations, COVID-19 safety measures such as hand sanitisers and glove to press the EVM button, were provided to voters.

The polling exercise involved deployment of 40 companies of the Central Armed Police Force to assist local police (2,420 personnel) IRBn (901) and home guards (1490). While 27 CAPF companies were positioned in Puducherry, six were deployed in Karaikal, four in Yanam and three in Mahe. An estimated 6,835 polling personnel were engaged for the process.