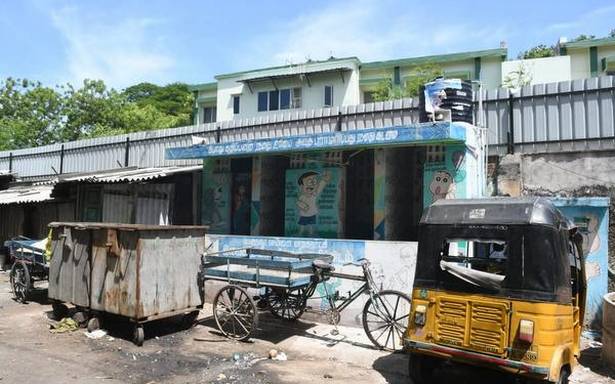 Residents of Gandhi Nagar and Indira Gandhi Nagar slums want the Greater Chennai Corporation to maintain their children’s toilets in the locality which are in poor condition. They also want the civic body to impose fines on those who defecate in the open and create awareness about the importance of using urinals among the public.

There are three toilets for children, constructed by the Greater Chennai Corporation, in Gandhi Nagar and Indira Gandhi Nagar slums near Dr MGR Chennai Central Railway Station. Various cartoon characters are painted outside these toilets to indicate it is for children. “However these are not maintained properly and children do not use them as the place stinks. They defecate in the open instead and this causes serious health concerns. Some miscreants break the pipes and most often there is no water supply,” said Lakshmi, a resident of the locality.

Other residents complain that some adults use these toilets for children at night and the space around it is used as a parking space. “The garbage cans are placed right outside the toilets and the place is poorly maintained and unhygienic. This is one of the reasons why parents do not want to send their children to these toilets,” said Vinod, another resident.

Residents want the corporation to clean the toilets and make them usable. “They cleaned it during the election, now it’s back to square one. During the pandemic, the civic body should also sanitise them regularly. They should also create awareness, through street plays, among the public on health hazards of open defecation,” said Ms. Lakshmi.

Meanwhile, a GCC official said that there was no water in two of the toilets as the motor was under repair for the past two days. “The third one has no problems. We are planning to create awareness in the locality and make them use the toilets,” he said.

Govind Murugan, founder of Dhaagam Foundation which conducted campaigns to highlight the plight of public toilets, said that most of the public urinals in the city are in a bad condition. “It is important to keep toilets clean and well sanitised especially during a pandemic,” he said.