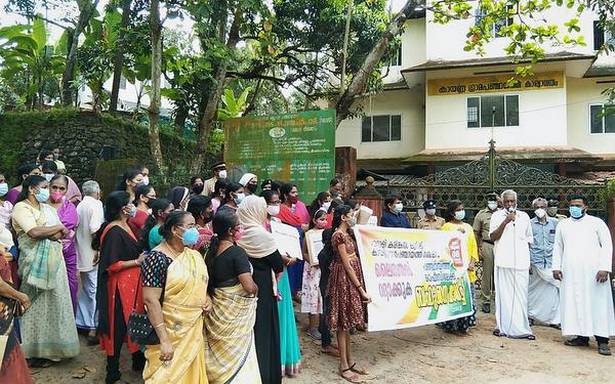 Facility poses safety threat to houses; Mining and Geology Department yet to release report on feasibility of quarry

The public protest in Kayanna panchayat demanding the closure of the Poraali granite quarry is gaining strength, with the relay strike organised by the anti-quarry protest committee completing 30 days on Monday. The committee had recently held a march to the panchayat office raising the issue as part of the different modes of protests planned here.

The Poraali quarry that started functioning in 2018 had been shut down after a few months following the stop memo served by the panchayat upon public demand. The major problem was the tremor experienced in the region whenever there was an explosion in the quarry. As a result, cracks started developing on the walls of the houses in the area, of a nearby church and a newly constructed school building.

“Children jerk awake from their sleep and start crying when there is an explosion. There are cracks on around 45 houses here,” said Iype Vadakkethadam, chairman of the protest committee.

The Porali quarry is located in the valley of Kattullamala, a hillock which is mostly dense forest with a lot of rocks. “The granite is not visible on the surface. They had to dug up to five metres to expose the rock,” Mr. Iype said.

The quarry resumed operation a few months ago after the panchayat council passed a report favouring it.

“The quarry owners had greased enough hands to obtain that report in their favour,” Mr. Iype alleged.

The protest committee had appealed to the District Collector demanding a study on the feasibility of the quarry. The Collector had ordered the tahsildar and the Mining and Geology Department to conduct the study. The tahsildar’s report clearly stated that the cracks on the buildings were the result of the explosions in the quarry. However, the Mining and Geology Department’s report is yet to be released.

“This is a matter of our existence. There are around 50 houses on the hill that are affected by this explosion. In case there is a landslip, around 250 houses in the valley will be buried in mud,” Mr. Iype said.

The protest committee also fears there could be water shortage in the region in the near future, as a wetland down the hill is slowly getting filled with residue from the quarry. They are determined to continue protest until a stop memo is served on the quarry.