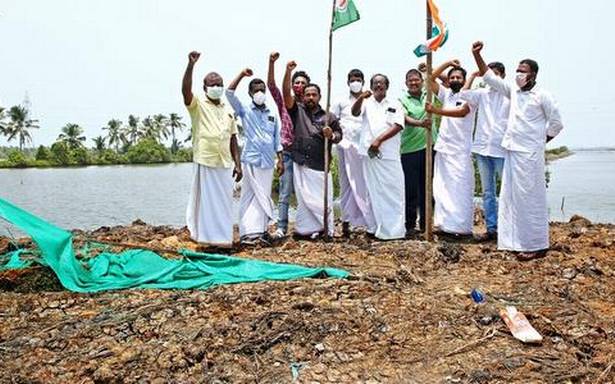 With Revenue officials allegedly turning a blind eye to attempts being made to fill 110 acres of paddy fields, Youth Congress activists organised a protest at Kumbalanghi, India’s first Model Tourism Village, on Friday.

Unscrupulous people had over six months ago allegedly erected a basement around the field that is being filled up, to build a compound wall.

The attempt to fill more paddy fields gained momentum during the run-up to the polls at Chudukad Padasekharam. Revenue officials failed to give a satisfactory reply even though an RTI was filed, said M.P. Sivadattan, District Congress Committee (DCC) secretary, while inaugurating the protest.

Thousands of migratory birds call at the vast paddy fields every year. This brings in visitors to view them. The filling of the fields will destroy the unique eco system in the area, he said.