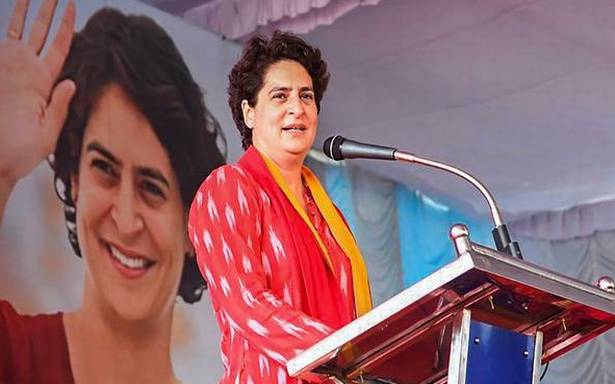 Congress general secretary expresses concern over low rate of testing and slow pace pace of vaccination despite COVID-19 cases exponentially going up in UP.

While offering 10 suggestions to the Uttar Pradesh government, she alleged that true extent of the pandemic is not coming out because of low testing.

In a three-page letter, Ms Vadra, who is the Congress in-charge for U.P, told the Chief Minister that he is accountable to the people in this war against the virus and if his government didn’t fight with determination and all the resources under its command, then future generations “will never forgive him”.

“Across the world, the fight against corona rest on four pillars: test, treatment, tracking and vaccination. Testing in UP is very low. It is negligible in rural areas. The pace of vaccination is very slow. I have offered some constructive suggestions to the Chief Minister through a letter. Hope he will heed,” Ms Vadra said on twitter and posted her letter.

In the letter, she raised the issue of oxygen and life-saving medicines being sold in black, acute shortage of hospital beds nd how Ayushmaan Bharat health cards are being refused by hospitals.

She said while the people with resources are paying three to four times the price for oxygen, Remdesivir, and life saving drugs, the poor have been left to their own devices.

Ms Vadra also narrated how family members of those who died because of COVID are overcharged at cremation grounds and the waiting time for an ambulance to carry the dead from a hospital stretches upto 12 hours because of a want of coupon.

“In every district and village of UP, numbers are being shown less while people are struggling to arrange wood to burn their dead,’ she alleged.

Talking about the slow pace of vaccination, she pointed that in a State with a population of 23 crore, so far less than a core have been vaccinated and the State government failed to scale up vaccination. .

Among the 10 suggestions, Ms Vadra has asked to announce a comprehensive financial package for all health and frontline workers, reestart all COVID hospitals and COVID care centers with more oxygen beds and engage retired medical officers nursing and paramedical staff.

Oxygen storage facility in each district headquarters, according tankers carrying the status of ambulance status to oxygen tankers and roping in Aanganwadi and ASHA workers to distribute medical supplies in villages are other suggestions.

She said while UP needs about Rs 10,000 crore for its vaccination programme, only 40 crores have been allocated. To scale up vaccination on war footing, she has UP government to explore the possibility of manufacturing vaccines in Bulanshahr-based Bharat Immunological and Biological Corporation.

“Government should not hide COVID Data and make the public aware about cremation grounds through local bodies Increase RTPCR testing and ensure sure 80% of testing is through RTPCR. Open new testing Centre’s in villages,”she said.

The Congress leader also asked the UP government to provide cash support to all poor and migrant workers who have returned home due to lockdown, provide local tax relief and waive off power and water charges for weavers, craftsmen, small shopkeepers and traders.