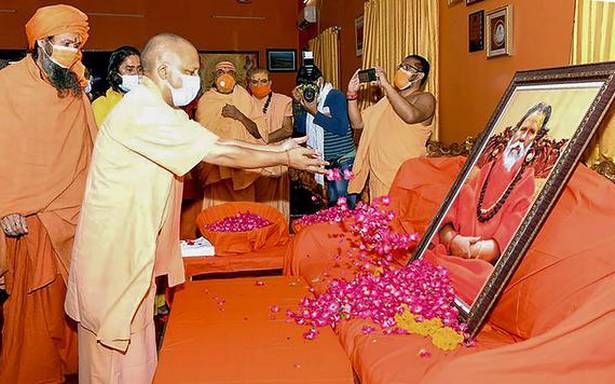 Uttar Pradesh Chief Minister Yogi Adityanath on Tuesday said those guilty in the death by alleged suicide of prominent Hindu seer Swami Narendra Giri would be punished after an independent investigation and Samajwadi Party (SP) president Akhilesh Yadav, who along with Mr. Adityanath visited Prayagraj to offer their final respects to the deceased seer, demanded that a probe be conducted by a sitting judge of the Allahabad High Court.

Giri was known to have had friendly ties with both the BJP and SP.

The police have booked Anand Giri, a close disciple of Narendra Giri till they had a public fallout earlier this year, for abetment of suicide and brought him to Prayagraj for questioning after detaining him in Haridwar with the assistance of the Uttarakhand police.

Anand Giri, a self-styled yoga guru who was arrested in 2019 in Australia for allegedly molesting two women but later acquitted, was named in a note recovered from the room in the Baghambhari Mutt where Narendra Giri’s body was found hanging by a fan, said the police.

In Prayagraj, Mr. Adityanath said Narendra Giri’s death was an “irreparable loss for the religious and spiritual world.” Evidence related to the death had been collected and a team of senior officers was probing the matter. “Each and every aspect will be revealed and the guilty will certainly be punished,” he asserted.

Mr. Yadav said only an investigation by a sitting High Court judge would “bring out the truth”. He demanded to know what kind of “mental pressure” was Giri under at the time of the incident and the “circumstances” leading up to his death. “We also heard that the bulldozer was going to be run over his land,” he stated in a veiled allegation that the BJP government was planning to demolish his properties.

ADG Law and Order Anand Kumar said that in the note recovered from Narendra Giri’s room, he had accused Anand Giri and two others of mentally harassing him. The FIR against Anand Giri was lodged on the complaint of another disciple of Narendra Giri, Amar Giri Pawan Maharaj, who alleged that Anand Giri had been harassing him. Narendra Giri usually had his evening tea at 3 p.m. but on Monday he refused it and when his disciples tried to reach him over phone it was found to be switched off, said Pawan Maharaj. The disciples then broke open the door of the room and found him hanging by the fan, added Pawan Maharaj.

Before being detained by police, Anand Giri said he was being falsely implicated in the case and claimed that his guru had been “murdered as part of a conspiracy” by those who siphoned off money from the Baghambari Mutt and the Bade Hanuman temple and blackmailed Narendra Giri. “I have full faith that he could not commit suicide,” he told a news channel.

Narendra Giri was the president of the Akhi Bharatiya Akhara Parishad, the body of 13 top Hindu sects in the country, apart from being the head priest of the Baghambari Mutt and the Bade Hanuman temple located near Akbar’s fort at the Sangam known for its reclining Lord Hanuman idol. Anand Giri shared a close and long relationship with Narendra Giri but things went sour earlier this year after the latter expelled him from the mutt as well as the Niranjani Akhara on charges of indiscipline for allegedly still maintaining touch with his family despite taking monastic vows and financial wrongdoings. Anand Giri had in turn accused his guru of selling off mutt property and engaging in other financial irregularities. The two, however, patched up in May after Anand Giri apologised to his guru, touched his feet and said he took back all allegations made by him under “ignorance.”

Narendra Giri was into his second term as the head of the Akhara Parishad and was often in with touch with politicians, including Mr. Adityanath and Mr. Yadav whom he even accompanied as he took a holy dip at the Sangam during the 2019 Kumbh Mela months before the Lok Sabha election. It was under Giri’s tenure that the Akhara Parishad had sought government action against “fake gurus” and self-styled ‘godmen’.

Narendra Giri’s political views often mirrored those of the Hindu right-wing. When the BJP government changed the name of Allahabad to Prayagraj, he welcomed the move, praising Mr. Adityanath for his “courage” and rejected Allahabad as a “name of slavery.”

In December 2019, after the Supreme Court awarded the disputed land where the Babri Masjid stood till 1992 for the construction of a Ram Mandir, he pitched for the inclusion of Mr. Adityanath’s name in the government appointed trust for the temple in the capacity of him being the ‘peethadishwar’ of the Gorakhnath Mutt in Gorakhpur.

Mr. Adityanath said Narendra Giri’s body would be kept for ‘darshan’ for his followers and an autopsy would be carried out on Wednesday before his body was laid to rest in a ‘samadhi’ as per rituals.

The term ‘akhara’ literally means ‘wrestling ring’ but it refers to the religious orders of Hindu seers. There are 13 existing ‘akharas’ belonging to different denominations, including the Shaivite and Vaishnavite sects. They enjoy a high spiritual standing among Hindu seers, and participate in the ‘shahi snans’ or ‘royal holy dip’ at the Kumbh, Ardh Kumbh, and Maha Kumbh Melas. The ‘akharas’ are also given preference in land allocations during the melas and their processions are showcased as the highlight of the mass event.