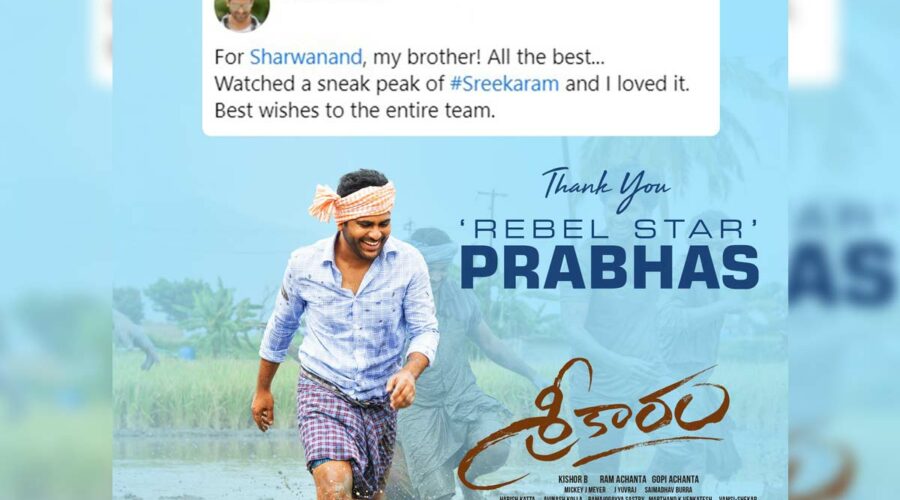 Sharwanand starrer Sreekaramis hitting the theaters today on 11th  March to coincide with Maha Shivratri. Pan-India star Prabhas wished Sharwanand all the best for the film as well as the team of  Sreekaram, which is based on the agriculture and farming. Prabhas took to his microblogging and said, “For Sharwanand, my brother! All the best…Watched a sneak peak of Sreekaram and I loved it. Best wishes to the entire team.”

Not only Prabhas, Mega Power Star Ram Charan also came in the support of Sreekaram and took to his Twitter, he said, “It’s brave of Sharwanand to take such a noble thought to the masses. Sreekaram is a perfect blend of all the emotions backed by the  heartwarming performances. It’s a must watch film for everyone with their friends and the  family.”

According to the director of Sreekaram, Kishore Reddy, the story of Sreekaram is penned based on real incidents that he witnessed while growing up in an agricultural family in Tirupati.

During the media interaction, Sharwanand said, “This film Sreekaram made me believe that farming is truly a viable profession for Gen Next that can and should be taken up. I hope the movie lovers feels the same after watching it.

On the work front, Prabhas  is currently busy in Radhe Shyam, Salaar and Adipurush.