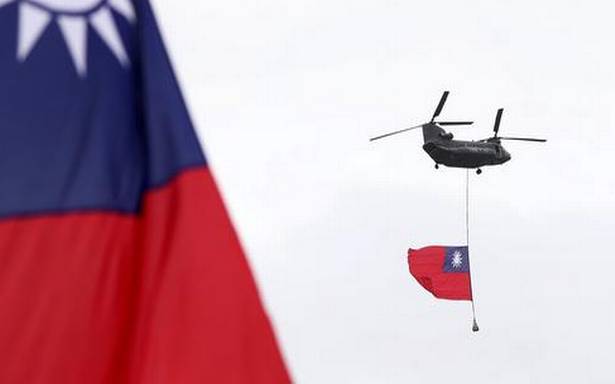 They were put up by a BJP leader and were not authorised, says civic body

Posters wishing Taiwan on its “National Day event” by a member of the Bharatiya Janata Party (BJP) were taken down after the Chinese embassy in Delhi raised the issue with the Ministry of External Affairs, sources in New Delhi said. The New Delhi Municipal Council said the posters were not authorised and were removed.

The posters, issued by BJP’s former Delhi spokesperson Tajinder Singh Bagga, had been put on billboards outside the Chinese embassy on Shantipath in the diplomatic area, and wished Taiwan “Happy National Day” for October 10 on Friday evening.

They were put up “without permission” and were ‘unauthorised’, the NDMC spokesperson told The Hindu, adding that they were taken down on Saturday morning by their staff, who were alerted after Mr. Bagga had tweeted about it.

In a tweet the Chinese embassy said, “China firmly opposes any individual or any move trying to create ‘two Chinas’ or ‘One-China, one Taiwan’, which violates this position.”

India does not recognise the “Republic of China [Taiwan]” diplomatically, though New Delhi maintains cultural, economic and tourism ties with Taipei. The controversy over the celebrations of Taiwan’s “national day” grew after the Chinese embassy sent a note to journalists asking them to “stick to Indian government’s position on Taiwan question and not violate the One-China principle”.

The MEA declined to comment on the posters but had dismissed the embassy letter on Thursday saying the Indian media is free and “reports on issues as it sees fit”.

The latest spat comes amidst tensions over the six-month long stand-off in Ladakh and unprecedented violence after Chinese troops amassed along the Line of Actual Control in April this year.