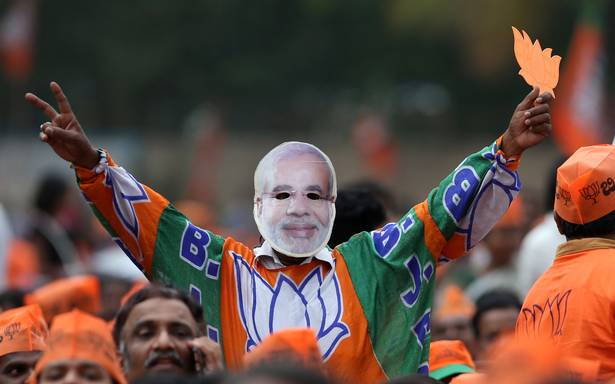 Among the youth, except in non-Hindu communities, the BJP has found acceptance across caste groups. PM Modi’s popularity was a great pull factor

Since 2014, it has been noted that young voters are particularly strong supporters of the Bharatiya Janata Party (BJP). The party has taken care to assiduously woo this segment. It initiated several campaign programmes to attract the youth before the 2019 Lok Sabha election. A digital campaign, ‘Youth with Modi’, was launched on social media to connect people on a single platform to discuss and advertise the popular policies introduced by the National Democratic Alliance (NDA) government. The youth wing of the BJP, the Bharatiya Janata Yuva Morcha, launched a campaign called ‘Modi Yuva Shakti’. This was used to popularise the BJP’s schemes among college students.

Prime Minister Narendra Modi started focusing on the youth much before the election and urged them to get registered as voters. For instance, on August 15, 2017, in his Independence Day speech, Mr. Modi said that 2018 would be an important year as all those who were born at the start of the century would turn 18 and should get registered as voters. “They are going to be the creators of the destiny of our nation in the 21st century. I heartily welcome all these youth, honour them and offer my respects to them,” he said. In other words, the BJP was keenly aware of the importance of the youth vote.

Table 1: Preferences for the parties by age groups

Table 2: BJP emerged as the most preferred party among youth cutting across different castes of Hindu religion; most preferred by the youth living in towns

It is true that there is no great difference between the youth vote for the BJP and what the party receives from voters of other age groups. But the Congress’s relative inability to garner votes from second-time voters (23-27 years) and also from those in the 28-35 age bracket gave the BJP a considerable advantage. It is possible that having voted the BJP for two or three elections, these young voters may continue voting for the party in future elections, thus giving the BJP a long-term advantage.

This advantage can be seen across caste groups. The BJP, traditionally labelled as a party of Hindu upper castes, now has acceptance among younger voters belonging to other castes too. Among the lower OBCs, for instance, it saw a 14 percentage point increase in support among the youth from the last election. Nevertheless, a skew is still visible as young voters among upper OBCs and Dalits have not supported the party in such large numbers.

Similarly, the BJP could not find acceptance among young voters from non-Hindu communities. So its appeal among the youth remains limited to Hindu youth in particular. It is noteworthy that the BJP’s acceptability saw a dip of 11 percentage points among youth from other religious minorities. Another myth which was busted in this election was that the BJP is an urban party. In this election, its vote share was higher among young voters in towns and rural India than in cities.

Prime Minister Narendra Modi was a pull factor for first-time voters. More than the party or the local candidate, for these voters the prime ministerial candidate was the most important consideration while voting. One-third of young BJP voters saw the prime ministerial candidate as the most important consideration while voting. This was nearly double the national average. This can also be affirmed by the fact that the same proportion (33%) of young BJP voters asserted that they would have voted for some other party had Mr. Modi not been the prime ministerial candidate. This figure was 10 percentage points higher than the national average. In States such as Haryana, Rajasthan, Uttarakhand, Maharashtra, Madhya Pradesh and Karnataka, Mr. Modi’s popularity among the youth was higher than the State average. Interestingly, in two southern States which have strong State-based parties, Telangana and Andhra Pradesh, Mr. Modi was the most preferred Prime Minister among the youth.

The Balakot air strikes also gave a push to the BJP’s campaign, as shown in the table. It would not be wrong to say this incident changed the discourse of the election and pushed issues like unemployment, price rise and agrarian distress to the background. This can be ascertained by the fact that young voters who considered joblessness as an issue voted for the BJP after hearing about the air strikes. In this election, the youth was clearly with Mr. Modi.

05/28/2019 India Comments Off on Post-poll survey: BJP, the most preferred party of young India
India