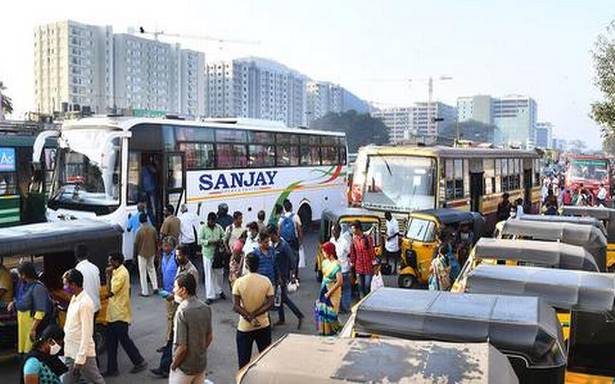 Perungalathur, Poonamallee and Red Hills suffer from a lack of facilities, with damaged roads and rampant encroachment leading to traffic snarls on a daily basis

Chaos prevails at Perungalathur, Poonamallee and Red Hills, the three main entry and exit points of the city, with traffic and unhygienic conditions causing major inconvenience to pedestrians and motorists alike. Dug up roads, vendors on the carriageway, autorickshaws and call taxis occupying roadsides and buses parked in the middle of roads have become a nightmare for residents of these localities.

For the last few years, all mofussil buses have been diverted through the Tambaram-Maduravoyal Bypass Road to the Chennai Mofussil Bus Terminus (CMBT) instead of allowing them to criss-cross city roads. People in the southern parts of the city or other parts have to cross the Perungalathur bus stop to reach the southern and western districts.

Regulating traffic in Perungalathur continues to be a major challenge as private omnibuses and even government buses encroach on the carriageway, resulting in heavy traffic jams.

Kathiresan, a resident of Adambakkam, said, “It is always a nightmarish experience when we return from our native town. In the early hours, no police personnel is present to regulate the traffic. Immediately after disembarking, we get accosted by autorickshaw and call taxi drivers. The entire stretch is encroached by them, blocking the free flow of incoming vehicles.”

Those who disembark from buses or other vehicles have to bear foul odour as many early morning travellers use the place as an open urinal. There are no toilet facilities on either side of the road.

In case a commuter wants to catch a train, they have to cross the railway track to reach the ticket counter which is on the opposite side.

At the halting point for buses headed towards Tambaram, there is no bus shelter or seating facility. Though a shelter exists on the eastern side of the bus stop, it is hardly adequate to accommodate everyone. The waiting passengers are left to wait in the open, unhygienic roadside.

K.V. Radhakrishnan, forcer vice-chairman of Peerkankaranai town panchayat, said, “Several bus services of the State Transport Corporation converge on the spot at the same time. This naturally leads to massive traffic jams, with vehicles piling up for more than a kilometre.”

Anand N., a businessman and regular commuter from Chromepet, said, “It is a harrowing experience to cross the stretch in my car. Traffic is always heavy between Tambaram and Perungalathur. During weekends, it takes me three hours to get through. GST Road is regularly hit by traffic snarls in Guduvanchery too.”

R. Panneerselvam, president of the Federation of Tamil Nadu Sand Lorry Owners’ Coordination, said this important point lacks basic facilities like waiting rooms, restrooms and drinking water dispensers. “Buses are parked recklessly in the middle of the roads, blocking free flow of traffic. Traffic is not properly managed. Though traffic police are present at Perungalathur and other spots, they can do little to manage the large number of vehicles piling up,” he said.

A senior traffic police official said, “We deploy adequate manpower round the clock to regulate traffic and patrol the area. As and when there are breakdowns, we attend to it quickly. Due to our consistent steps, we have reduced traffic congestion here. However, on weekends, a large number of motor vehicles pass by. Once the new bus stand in Kilambakkam is opened, traffic on GST Road will reduce considerably.”

The situation is similar at the Poonamallee bus stop, which is a major transit point for people who travel to the northern districts of the State or are coming to the city. K. Baskar, a social activist and advocate, said both sides of the road were encroached upon by shopkeepers who extended their businesses to the roadsides, shrinking the road and blocking free space. “Autorickshaws also encroach into the space,” he said.

Though traffic congestion on the roads leading to Red Hills had reduced to some extent, once an Outer Ring Road at Padianallur was commissioned, authorities should restrict the entry of heavy vehicles. “The bus stand should be improved with basic amenities,” said Jude Mathew, Tamil Nadu Independent Vehicle Owners’ Association.