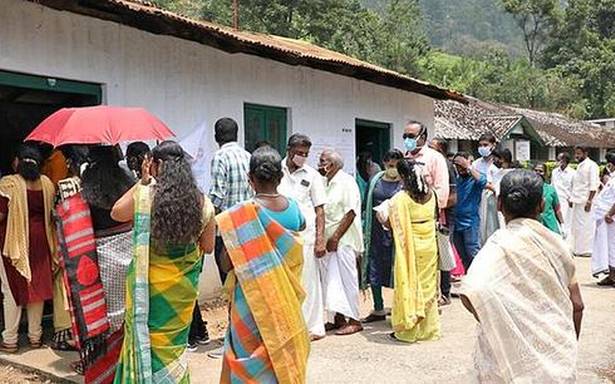 Polling was near-peaceful in the district on Tuesday. However, tension prevailed at Cumbom Mettu and Nedumkandam.

The Nedumkandam police have registered cases against 12 persons for casting double votes. Nedumkandam Circle Inspector Suresh said that cases were registered against the persons under Cr.PC 151. They were waylaid by Bharatiya Janata Party workers while on their way to Tamil Nadu in a jeep.

Tension prevailed at Cumbom Mettu where Congress workers blocked a vehicle alleging that it carried people from Tamil Nadu who were on their way to cast votes in Kerala after casting votes in Tamil Nadu.

On the border check-posts, Central forces had been deployed to prevent cross-border voting.

There were 1,292 booths in the five Assembly constituencies in the district, including those in remote forest areas in the Devikulam and Peerumade constituencies.

The remotest polling booth of Pachakanam inside the Periyar Tiger Reserve had only 29 voters. In some polling stations, especially in the Idukki and Thodupuzha constituencies, there were long queues of voters.