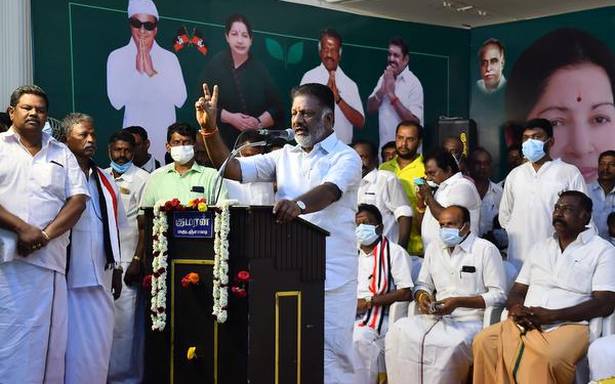 AIADMK coordinator O. Panneerselvam on Wednesday said the political situation in the State was in favour of the party and its candidates would win in all wards in the February 19 urban civic polls, and this would be a lesson for the DMK.

Participating in a meeting to introduce candidates contesting in Salem Corporation, Idanganasalai Municipality and a few other town panchayats in Salem, he felt 2011-2021 was a period of good governance in the State. There were no power cuts and drinking water shortage during the AIADMK regime, he claimed.

Though the situation was conducive for the victory of the AIADMK in the last Assembly elections, the public fell prey to the attractive poll promises made by the DMK, he said. Now the people have realised that the DMK was unable to fulfil its poll promises, while the AIADMK, he claimed, had fulfilled all its electoral promises during the time it ruled Tamil Nadu.

The AIADMK leader said Chief Minister M.K. Stalin had promised that he would sign on files abolishing NEET immediately on assuming office. “Has it been abolished,” he asked.

Highlighting the various welfare schemes implemented during the erstwhile AIADMK regime, Mr. Panneerselvam was of the view that the AIADMK better handled COVID-19 containment measures and its cadres distributed relief materials to the public.

Campaigning in Erode, Mr. Panneerselvam accused the DMK leaders of cheating 37 lakh voters by not fulfilling the promise of gold loan waiver. Chief Minister M.K. Stalin and Udhayanidhi Stalin had asked the people to pledge gold and obtain loans from the cooperative societies. They assured the voters that the loans would be waived off once they came to power. “Believing them, 50 lakh people pledged their jewellery. But after 10 months, they say that loans could be waived only for 13 lakh people,” he said.

He also said that the DMK had failed to fulfil its election promise of increasing the work days under the MGNREGS from 100 to 150 days. “You cannot do that as you don’t have administrative skills’, he said. The former Chief Minister blamed the DMK for distributing poor quality items in Pongal gift hampers and added that even cattle refuse to consume the rice distributed for Pongal.

02/09/2022 India Comments Off on Political situation in favour of AIADMK: Panneerselvam
India