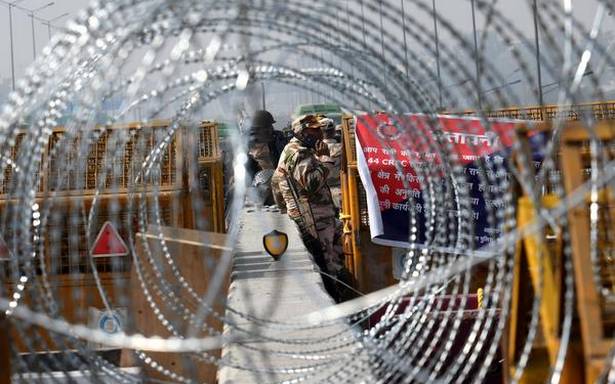 Government is treating us like invaders, says farm leader; SC panel yet to meet unions

Delhi has been turned into a fortress as the police continued to block access to border protest sites on Tuesday with concrete barricades, barbed wire, nails and trenches across approach roads, and undertook massive deployment of security personnel. Journalists and other visitors were denied entry to the Singhu border site, and Internet connections remain suspended.

“The government has turned these protest sites into open air prisons. They are treating farmers like foreign invaders. Even the British did not do that,” said P. Krishnaprasad, a leader of the All India Kisan Sabha.

On February 6, the Samyukt Kisan Morcha (SKM) will organise a nationwide, three-hour highway blockade, to protest against the police actions, he said.

In this atmosphere, the Supreme Court-appointed committee is set to hold its third meeting on Wednesday, but is yet to meet with any of the protesting unions as the situation is “very hot”, according to one of the members of the committee.

Farm unions have condemned the police repression and arrests. The SKM has set up a legal desk to aid the 115 protesters who have been arrested and are now in jail, as well as the 29 protesting farmers who are still missing after Republic Day.

At a late night press conference, the SKM team alleged that those in jail faced torture and had not been sent for medical examination.

The lawyers would file habeas corpus petitions for production of the missing persons with the aid of the Delhi government’s Home Ministry, said Rajinder Deep Singh Wala of the Kirti Kisan Union.

He added that all those arrested, whether or not they stuck to the planned route for the tractor parade would receive support. Apart from this, more than 160 people have died since the agitation began over two months ago.

In a written response to a question raised by 28 Members of Parliament in the Lok Sabha, Agriculture Minister Narendra Singh Tomar said the Centre does not propose to give any compensation to the families of farmers who have died during the ongoing agitation against the three farm laws. In response to another question on whether the government has any plan to repeal the laws, Mr. Tomar only said, “The recent farmers Reform Laws implementation has been stayed, at present by Hon’ble Supreme Court.”

With tensions running high, Pramod Kumar Joshi, a member of the SC-appointed committee told The Hindu that his panel was yet to approach any of the protesting unions.

“They have already said they will not participate in our proceedings. We will definitely write letters to them, and will also call them and convince them to talk to us as we are not the government,” said Dr. Joshi.

“But we thought that let us settle down things, then only we will approach them. Right now, the situation is very hot, so we thought let us avoid that at this stage. Later on, we will do it,” he added, when asked about the impact of the barricades, arrests and high tensions on their consultations.

However, he added, “We have our jobs, we are doing our job. We are not being affected.” The panel plans to hold three more meetings with other farmers groups this week.

The Ghazipur protest site on the border with Uttar Pradesh has been boxed in by multi-layer barricading. In the midst of the metal and concrete barricades, Bharatiya Kisan Union leader Rakesh Tikait said farmers had dug in with the determination to stay until next October or November if need be, and have sufficient supplies being sent from their villages to support them until the Centre withdraws the three contentious agriculture reform laws. Mr. Tikait intends to address a mahapanchayat in Haryana’s Jind district tomorrow, where further mobilisation of farmers is taking place.

On the Haryana border at Singhu as well, farmers said they have set up supply lines with ten villages and are preparing for the long haul. The new police restrictions have also forced farmers to scramble to set up new facilities for sanitation.