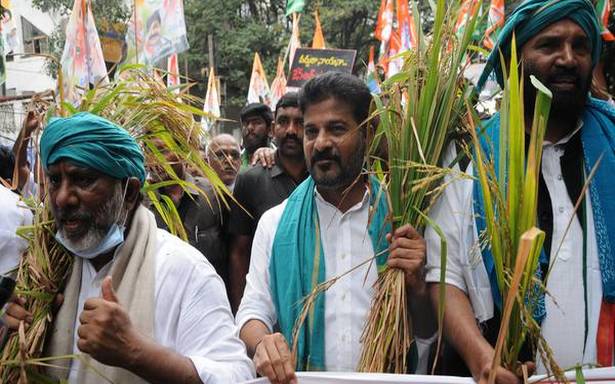 A large number of police have been deployed around the residence of Telangana Pradesh Congress Committee (TPCC) president and Malkajgiri MP A. Revanth Reddy in Jubilee Hills here from early on December 27 to prevent him from venturing out and head for Erravelli village of Markook mandal in Siddipet district from staging Rythu Rachhabanda protest.

The police have already denied permission to the protest citing restrictions imposed on public meetings, protests and rallies as part of measures to contain the spread of Covid-19, particularly the Omicron variant following directions from the High Court. The protest meeting at Erravelli has been planned by Kisan Congress, the farmers wing of Congress.

Revanth Reddy planned the protest to question Chief Minister K. Chandrasekhar Rao as to how the latter could cultivate paddy in his farm house when the State Government has been advising farmers not to take up the crop this Rabi season stating that the Centre/Food Corporation of India (FCI) has announced not procuring parboiled rice, only which is produced in Telangana in Rabi.

Senior leader of the Congress T. Jeevan Reddy has also questioned the Chief Minister on cultivating paddy in Rabi. However, the ruling Telangana Rashtra Samithi (TRS) leaders have alleged that the Congress was only planning to gain some political mileage by staging the protest when restrictions were imposed till January 2 to contain the spread Covid-19.

The protest planned by Revanth Reddy has once against brought out differences within the TPCC as working president T. Jayaprakash Reddy has made it clear that he would boycott the protest since he was not invited for it. Senior leader V. Hanumanth Rao has suggested Revanth Reddy to take everyone in the party along with him.

Meanwhile, State president of Bharatiya Janata Party (BJP) and Karimnagar MP Bandi Sanjay launched a protest in support of the unemployed youth and against the State Government for not taking up recruitment process for filling vacancies. He along with a large number of party leaders including in-charge of party affairs in Telangana Tarun Chug participated in the protest being staged in BJP office here from 11 a.m. to 4 p.m.

The venue of the protest has been shifted from Indira Park following denial of permission in the backdrop of Covid-19 restrictions. A large number of party workers gathered at the protest, although the police have stopped them in districts from proceeding towards Hyderabad.