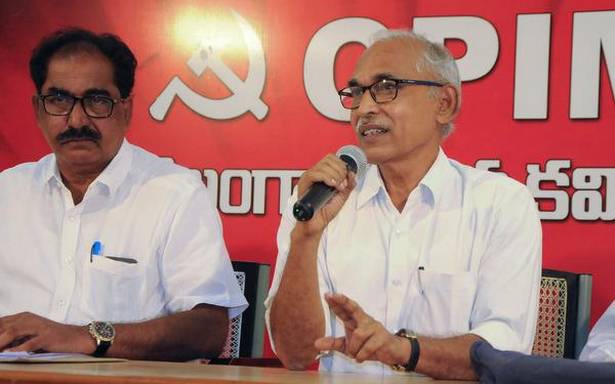 The Communist Party of India (Marxist) has said that farmers as well as the representatives of Kisan Samyukta Morcha think that Prime Minister Narendra Modi’s statement withdrawing the three farm laws was nothing but drama.

CPI (M) politburo member B.V. Raghavulu wondered as to whom the Prime Minister had apologised. “There is no clarity in the PM’s statement. The development appears like a drama. Is the PM apologising to around 750 farmers who lost their lives because of the Centre’s decision or is he apologising the deaths of farmers who were run over by the convoy of a Central Minister?” he asked.

Speaking to reporters during the conclusion of State CPI (M) committee’s two-day meeting here on Sunday, Mr. Raghavulu appreciated the leaders of the Morcha for deciding to continue their agitation till the “anti-farmer legislations” were withdrawn formally and for enactment of a legislation on minimum support price. The CPI (M) extended its solidarity with the protests planned by the Morcha on November 26 and the party leaders and cadre would work for ensuring the success of the protests.

He demanded that the Centre announce compensation for the families of farmers who lost their lives during the agitation and punish the son of the Central Minister who was responsible for the death of farmers at Lakhimpur Kheri. He welcomed Chief Minister K. Chandrasekhar Rao’s support to the farmers’ agitation as also his demand for withdrawal of Electricity Act mandating meters to agricultural connections.

“KCR carries a blame that he will support people’s movements, but maintains silence subsequently. He should continue his firm resolve against the Centre so that it helps remove the apprehensions against him,” Mr. Raghavulu said, adding that TRS would suffer heavily in the coming days if the Chief Minister did not take steps in this direction.

He expressed concern that the Central government was trying to privatise the godowns of the Food Corporation of India in the name of monetisation of assets by leasing storage space to private sectors. “KCR is yet to respond to the Centre’s move in this direction. TRS should also clarify its stand on the Centre’s move to privatise power transmission lines, telecom towers, Secunderabad railway station and other assets,” he said.

11/21/2021 India Comments Off on PM’s apology nothing but drama: Raghavulu
India