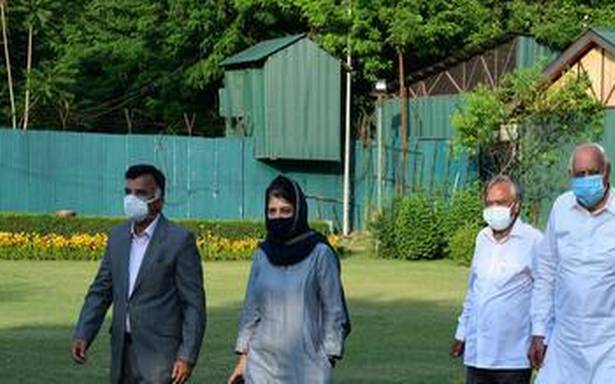 ‘The talks would be open-ended,’ a senior National Conference leader and former Minister said on condition of anonymity.

The Prime Minister Office’s (PMO) move to drop any pre-condition or fix agenda for the talks on June 24 set the meeting ground between the Centre and Jammu and Kashmir parties, according to Valley-based leaders.

“It was only after the Centre showed willingness not to put any redlines for talks … it prepared the ground for the engagement,” a senior National Conference (NC) leader and former Minister told The Hindu, on condition of anonymity.

He said the talks would be open-ended. “Neither delimitation nor early elections nor Statehood will be the agenda of talks. It then limits the scope of dialogue and engagement,” he added.

The PMO’s shift came after the NC showed willingness to be part of the delimitation commission to delineate more Assembly and Parliamentary seats for J&K, an exercise boycotted and questioned by the NC even in the Supreme Court.

Earlier, top Bharatiya Janata Party (BJP) Ministers at the Centre, including Union Home Minister Amit Shah, would ask the regional parties to limit their demands to Statehood and stop seeking any special status, after the Centre ended J&K’s special constitutional position on August 5, 2019.

“We will continue to demand restoration of August 4, 2019 position of J&K. We will also seek to address the genuine aspirations of people. There has to be development with dignity,” NC leader and Member Parliament Hasnain Masoodi said, ahead of the meeting in Srinagar.

The PMO’s move is a significant scaling down of the BJP’s position on the issue of special status for J&K. It remains to be seen if Prime Minister Narendra Modi would listen and respond to the position of the Gupkar alliance, an amalgam of five political parties seeking pre-August 5 position in J&K, on June 24.

A senior Peoples Democratic Party (PDP) leader, however, said there were fears within the party that the BJP intended to limit the engagement to optics. “We have our fingers crossed and wish it’s not a trap but a genuine change in thinking and approach. It is a welcome step if the PM agrees to listen to the political positions of regional parties. Only the events and gestures after the June 24 meeting will set the momentum for the talks,” the PDP leader said.