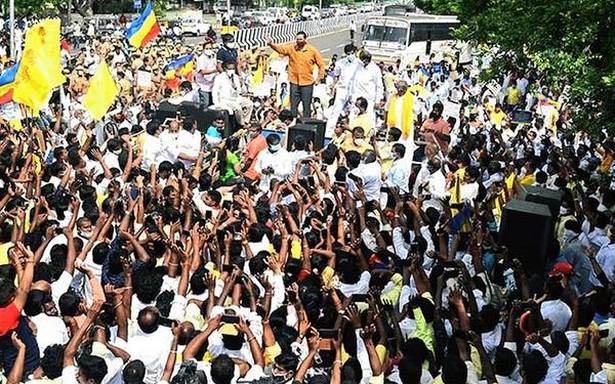 The Pattali Makkal Katchi, which fought the 2021 Assembly election in alliance with the AIADMK, reversed its electoral fortunes and established leads in Pennagaram (9,890 votes), Dharmapuri (15,852 votes), Salem West (13,218 votes) and Mailam (780 votes), while fighting a close contest in Jayamkondan and Vridhachalam in a see-saw battle on Sunday, at the time of going to print.

According to the ECI website, till 8 p.m., the PMK polled 3.84% of the votes, contesting in 23 constituencies. The party’s founder, S. Ramadoss, and youth-wing leader Anbumani Ramadoss were yet to make a formal statement.

The party’s key office-bearer, Vadivel Ravanan, went down in a fight in Kilvelur. The possible victories, even though as part of a losing alliance, will come as a huge relief for the party as its electoral fortunes have been dwindling.

Sources in the party predictably attribute a good measure of the success to the 10.5% internal reservation for Vanniyars within the Most Backward Classes quota, passed by the AIADMK government. Party leaders say the move galvanised the Vanniyars and made them vote as a bloc to the AIADMK-PMK alliance.

While the PMK won three seats in the 2011 Assembly election, it did not win even a single seat in the 2016 poll.

The party won the Dharmapuri Lok Sabha Parliamentary seat in 2014 as part of the NDA, but could not win a single Lok Sabha seat in 2019 in the same alliance. In this context, the PMK’s measured success this election gains significance.

Party sources said the performance of the AIADMK in the northern and western districts was mainly due to the transfer of votes from the PMK. Interestingly, the consolidation could not be seen uniformly across the northern districts. For instance, in Tiruvannamalai district, which also has a substantial Vanniyar population, the DMK had established a clear advantage in four of the six seats. Even in Arcot and Sholingar Assembly constituencies, the consolidation did not work in favour of the PMK-AIADMK alliance and it will require further analysis to understand why and where it worked.

Though disappointed with the result, many in the party felt Dr. S. Ramadoss’ decision to demand reservation for Vanniyars elevated his image within the community and helped increase political capital.